The Korean team, ranked seventh, won against Belgium, the top ranked team, 40-34 in the 24th inning. Prior to the final game, the Korean team played against Turkey in the quarterfinals and France in the semi-finals.

Three-cushions billiards, one of the categories in professional billiards, is played in a format where a point is scored for each successful carom, or strike and rebound. The cue ball has to contact three or more cushions and has to make contact with two other balls from one each shot. The team that scores 40 points first wins.

Although Belgium was the most likely team to win based on the ranking and by having Frederic Caudron, one of the top professional three-cushion billiards player, the Korean team came out strong to defeat the world’s best team. The game was unpredictable until the 22nd inning as Korea was leading only by one point, 32-31.

But in the 23rd inning, Korea scored six consecutive points and as the duos each earned a point in the 24th inning, the game was concluded, 40-34. 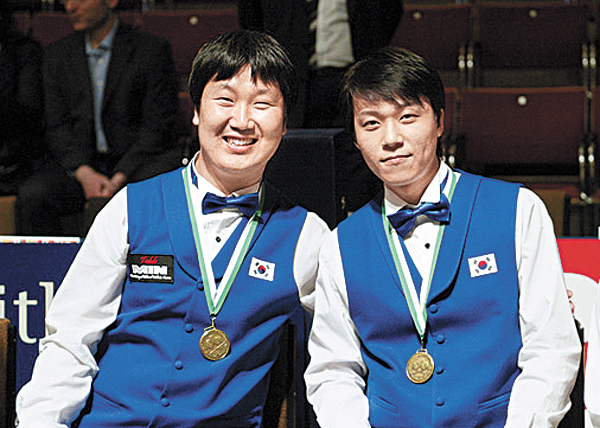 As Choi continues to play in Europe, the birth country of three-cushion billiards, his achievements are becoming Korea’s achievements, as well.

Choi started billiards at age nine, as his dad owned a billiard hall, and turned professional in 2002, when he was a freshman in college. Since he made his professional debut later than others, he stayed up until dawn practicing. Choi studied other players’ strengths and made them his strengths, as well.

“Choi is usually playful but when he starts playing in the tournament, he becomes an adventurer,” Na Geun-ju, an official at the Korea Billiards Federation, said.

The victory means a lot to Choi personally, as this was his first win since the 2014 UMB World Three-cushion Championship. After winning the world championship, Choi could not find motivation to work hard and fell into a slump.

“I remember us crying after we couldn’t score a point and lost to Sweden at the World Championship,” Choi said. “And we told ourselves that we’ll never let it happen again.”