Lee is ready to do battle in Pyongyang

Lee is ready to do battle in Pyongyang 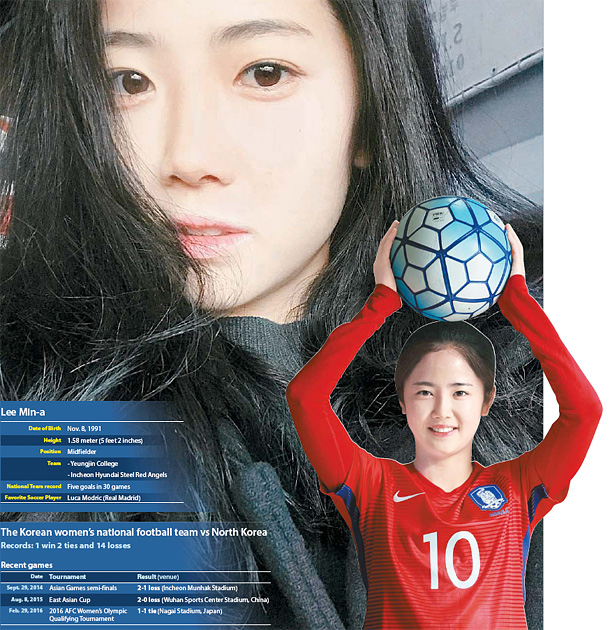 Thanks to her amazing performances, Lee Min-a is rapidly becoming known as a football idol. The larger photo is a selfie by Lee. [KIM SANG-SEON, LEE MIN-A INSTAGRAM]

North and South Korea’s relations may be glacial, but the sport world continues on. The face-off between the women’s football teams of the North and South will commence at Pyongyang’s Kim Il-sung Stadium on April 7.

A preliminary match for the 2018 Asian Football Confederation (AFC) Asian Cup is a cause for excitement.

In the preliminary league opening in Pyongyang, South Korea will play against India in the first round on April 5, North Korea in the second round, Hong Kong on April 9 and Uzbekistan on April 11. Only the first-place finisher will qualify for the Asian Cup among these teams.

As Yoon Duk-yeo, coach of the South Korean women’s national football team, announced the 23-player team roster traveling to Pyongyang on Monday in Seoul, he expressed his concern about the players as it is the first time the team will be traveling to North Korea to play since the North-South Unification Match in October 1990. At the time, Yoon participated in the match as a football player.

Although many veteran players like Lee Min-a, Kim Jung-mi, Yoo Young-ah, Jeon Ga-eul, Kim Do-yeon and Jung Seol-bin were named in the roster, none have played in North Korea.

The Ministry of Unification has allowed less than 40 people, including the coaching staff and the players, to travel to Pyongyang. Although the media organ of the General Association of Korean Residents in Japan, Choson Sinbo, reported on Friday, “To everyone hoping to view the North-South football match, [the North] will receive every person from the South,” the Ministry of Unification decided to send only the minimum number of people, not including the cheering squad.

In the aftermath of the assassination of half brother Kim Jong-nam, the match between Malaysia and North Korea scheduled for March 28 was postponed.

Despite the coach’s concern about the upcoming game against North Korea, Lee Min-a, 25, a midfielder for the South Korean women’s national team, expressed strong confidence in the team.

“Our team has [Ji] So-yun, who plays for England’s Chelsea Ladies, you know,” said Lee. “The caliber of our other players is much better than in the past, by far. The North Korean spectators’ zealous cheering may be troubling, but our team is solid and if I do well, it will be impossible to lose.”

Looking ahead to the Pyongyang game, Lee said, “My thoughts are always complicated when it comes to matches against North Korea. I’m worried for my team, but a part of me is worried for the North Korean players, as well.”

“At the 2014 Incheon Asian Games, [South Korea] lost unfortunately against North Korea 1-2 in the fourth round,” said Lee. “At the Olympic final qualifiers for the Rio Summer Olympics last year February, we tied 1-1. This time, I feel more than sufficiently up to the challenge.”

Lee led South Korea to second place in the East Asian Football Championship two years ago and was acclaimed as “Women’s football’s Cinderella.” At 158 centimeters (5 feet 2 inches), fans have to contain their excitement over her frenetic movements on the ground.

As a testament to her popularity, Lee’s occasional posts of her plain-clothes fashion on social media sites have become a topic of conversation.

From an initial 1,000 followers on Instagram, she now has about 20,000. Knowing that on her account, Min-a World, there are many middle-school boys and middle-aged men cheering for her, Lee said, “On my rest day, I wear a skirt because they want to see me as a girl off the field.”

She added, “If I score a goal against North Korea at Pyongyang, I definitely want to try to do the mannequin challenge,” referring to the trend of abruptly stopping one’s movements and remaining static while a camera pans the room.

“I want recognition for my football skills more than my appearance,” said Lee. “I want to break North Korea and play in the Asian Cup finals. After that, I will prepare for the 2019 [FIFA Women’s] World Cup in France.”