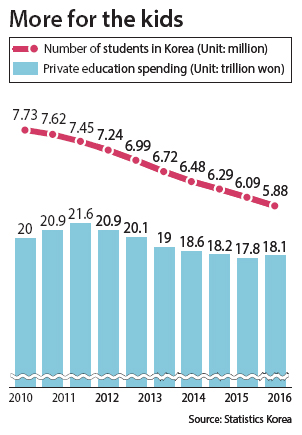 Korean families’ expenditure on private educational services including tutoring and after-school classes rose for the first time in seven years last year even though the number of students continues to fall in the country, new data showed Tuesday, suggesting that families, especially wealthy ones, are spending more on their children compared to the past.

Statistics Korea, the national government’s statistics agency, surveyed families with students in elementary, middle and high schools and looked at their spending on services outside of school. In Korea, it is common for students, even those in public schools, to enroll in private after-school cram programs and receive tutoring after their regular school day lets out. Total expenditure on such services last year rose 1.3 percent to 18.1 trillion won ($15.7 billion). The number of students, however, dropped to 5.88 million from 7.73 million in 2007, when the agency began compiling data in its current form.

Average spending per student on private educational services recorded an all-time high of 256,000 won per month, up 4.8 percent from the previous year.

High school expenditure rose the most in 2016. An average 262,000 won was spent on high school students’ private education, up 10.9 percent from a year ago. Over the same period, spending on middle school students fell 0.1 percent to 275,000 won, while those of elementary students rose 4.5 percent to 241,000 won.

The statistics showed that Korean students are spending more on private art, sports and music programs. The average student spent 63,000 won per month on such programs, a 19.5 percent rise from a year earlier.

Statistics Korea surveyed about 43,000 students from 1,483 schools across the country to gauge spending.