Seoul rolls out a preemptive defense of FTA with the U.S.

Seoul rolls out a preemptive defense of FTA with the U.S. 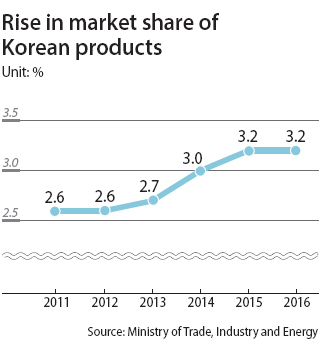 An American company that imports processed aloe drinks from Korea was able to push an aggressive marketing and growth strategy that got the drinks into WalMart and Sam’s Club thanks to the lifting of custom duties since the bilateral free trade agreement between Korea and the U.S. kicked in five years ago.

An American company that supplies panels and boards for ships once used Chinese products because they were cheap. Since the FTA, it was able to switch to Korean products with higher quality at lower prices. It increased imports of Korean goods by 110 percent.

The FTA between Korea and the U.S. reduced the administrative process to import Korean goods, allowing an American polymer-coated gloves importer to increase their imports 450 percent since 2012.

These are just few of the success stories produced by the bilateral trade agreement as described by the Korea Trade-Investment Promotion Agency (Kotra) on Tuesday.

The state-run trading arm stressed that the bilateral trade agreement contributed positively not only to Korean businesses but also to American.

Today is the fifth anniversary of the free trade agreement going into effect - and Korea is keen to defend it against protectionist noises coming out of the Donald Trump administration in Washington.

The Korean Ministry of Trade, Industry and Energy released a report trying to prove that the agreement had benefited both countries, saying that the exchange of goods of both countries increased an average of 1.7 percent annually since 2012 while overall global trade volume has declined.

The report claimed that the bilateral agreement was a win-win agreement for both countries.

The trade ministry report showed that Korean goods exported to the U.S. on average expanded 3.4 percent annually since the FTA was ratified.

By industry, automobiles grew 12.4 percent from 2012-2016. Automobile exports alone accounted for 23.3 percent of all Korean exports to the U.S. Semiconductor exports on average grew 4.2 percent over the same period.

As a result, Korean goods now account for 3.2 percent of U.S. imports, which is a 0.6 percentage point higher than in 2011. This is a faster expansion than Japan’s market share, which rose 0.2 percentage point during the same period to reach 6 percent. China accounts for the largest portion of U.S. imports, taking 21 percent, up nearly 3 percent compared to 2011. The U.S. does not have a bilateral FTA with China.

Korea stressed the benefits to America in terms of trade on the fifth anniversary.

While Korea’s imports declined an average of 5 percent annually since 2012, imports from the U.S. only dropped an average 0.6 percent during the same period - thanks to the FTA, according to the government. Imports of Japanese products nosedived 7 percent while imports from Asean countries declined 3.6 percent.

American goods now account for 10.6 percent of all goods Korea imports. That is up from 8.5 percent in 2011. During the same period, goods imported from Japan dropped from 13 percent to 11.7 percent.

American automobiles imported to Korea have seen a significant rise of 35.5 percent from 2012-2016. Last year, when tariffs on cars imported from America were completely lifted, imports surged 39.5 percent to nearly $1.7 billion, according to the Kotra report. In 2011, $347 million worth of American vehicles were shipped to Korea. Korean investment in the U.S. has roughly tripled since the FTA ratification. Between 2008 and 2011, Korean companies invested an average $2.2 billion. That figure rose to $5.7 billion between 2012 and 2015. Last year Korean companies made their largest investment in the U.S. at $12.9 billion. That’s a 76 percent increase compared to $7.3 billion in 2011.

The investments were concentrated in U.S. manufacturing industries including automobiles, home appliances, semiconductors and petrochemicals.

Trump has accused Korea and other major trading partners including China, Japan, Germany and Mexico of making the U.S. look like a fool while the U.S. economy suffers.

Earlier this month, the U.S. Trade Representative raised the subject of the increasing trade deficit with Korea and considered a “major review” of trade agreements.

“The largest trade deal implemented during the Obama Administration - our free trade agreement with South Korea - has coincided with a dramatic increase in our trade deficit with that country,” the office of the U.S. Trade Representative claimed March 1 in an annual report. “Plainly, the time has come for a major review of how we approach trade agreements.”

While the U.S. trade deficit last month reached its highest level in five years, $48.5 billion, its trade deficit with Korea amounted to $2.3 billion, double the $1.2 billion in December 2016.

Last year, the Korea Economic Research Institute estimated that if the Korea-U.S. FTA was renegotiated, Korea would suffer a $26.9 billion loss in exports between 2017 and 2021 and 240,000 jobs would be lost. The automobile industry alone would suffer a loss of $13.3 billion in exports.

Seoul is officially brushing off the idea of a renegotiation of the FTA, saying the recent report from the U.S. trade representative contained arguments made in the past. But it is trying to assuage Washington on trade.