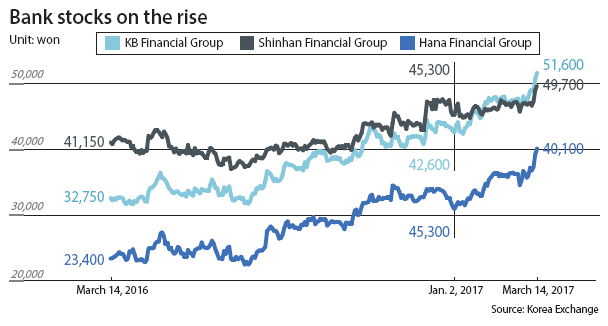 A much-anticipated rate increase in the United States is taking bank stocks for a ride as the move will likely boost their profit margins.

With the U.S. Federal Open Market Committee expected to announce an increase on Wednesday, shares of major Korean banks and financial holding companies surged on Tuesday.

Analysts expect that a higher Fed rate could improve banks’ net interest margin. The margin measures the difference between interest paid and interest received to show performance. “Higher market rates are heightening expectations for NIM improvement at banks,” said Park Jin-hyoeng, a researcher at Yuanta Securities. “Since most of the bonds at commercial and regional banks hold are linked to Cofix rates and market rates, higher market rates mean more upward pressure on loan rates.”

Interest on adjustable-rate loans is based on the Cost of Funds Index, or the Cofix, along with spreads set by banks. Cofix rates are calculated by averaging the interest rates of bank debentures, CDs, fixed deposits and installment savings by nine major lenders.

Analysts believe that the increased interest rate on bank debentures, a debt instrument at a fixed or floating rate of interest, will translate to the rise in rates of adjustable loans.

Of the banks, DGB Financial Group and Woori Bank will likely have the most to gain should the Federal Reserve deliver on its promise to accelerate interest rate increases, according to Daishin Securities.

“DGB Financial and Woori Bank will see its NIM rise five to six basis points in the first quarter,” said Choi Jung-uk, a researcher at Daishin Securities. “Seventy percent of loans from DGB Financial Group are not fixed ones but tied to the bank debenture rate.”

The proportion is the highest among its domestic peers.

Shinhan, Hana and BNK Financial Group will also see their margins go up by at least 3 basis points, he added. The lending rate of mortgages already started reaching near the 5 percent range.

Interest rates for five-year fixed-rate mortgages, one of the most popular loans among households, have edged up at major commercial banks.

KEB Hana Bank revised interest ranges, increasing them 0.15 percentage points to between 3.51 percent and 4.83 percent as of March 10, from 3.36 percent to 4.68 percent at the end of last month.

The lowest lending rate available at Woori Bank was 3.27 percent at the end of February, but it had since reached 3.31 percent.