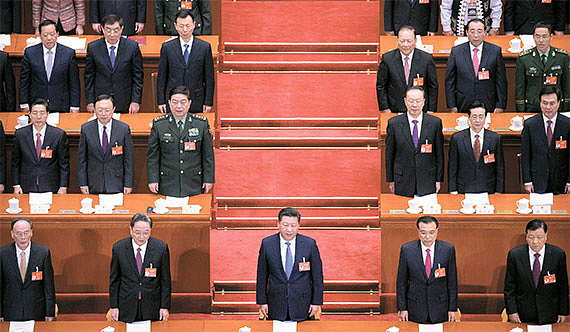 The Thaad system deployment is rapidly developing. On March 6, the Thaad launcher arrived in Pyeongtaek, only a week after the Thaad site transfer contract was signed. On March 8, China responded with Foreign Minister Wang Yi’s annual news conference. Minister Wang answered questions on One Belt One Road, U.S.-China relations and a diplomatic summary of Xi Jinping’s first term. These are the priorities of China’s foreign policy. The possibility of a war in the Korean Peninsula was the fourth most important topic. Minister Wang said he considers himself “a switch man” and asked to step on the brake.

Thaad was discussed as the ninth question on Korea-China relations. It is China’s diplomatic rhetoric to underplay the gravity and show room for negotiation. China-Japan relations were the fourth from last question, lower in priority than Africa and the Philippines.

Earlier this year, China moved back the marker of the start of the Second Sino-Japanese War by six years from the Manchurian Incident to the Marco Polo Bridge Incident. The Manchurian Incident was the bombing of the South Manchurian Railway being constructed by the Japanese military near Liutiaohu Lake in Shenyang on September 18, 1931. It became a pretext for establishing Manchukuo, Imperial Japan’s puppet state. Two months prior, Japan had engineered another event, using Koreans in Manchuria to start the Sino-Japanese War.

It was the Wanpaoshan Incident, which resulted in innocent victims. On July 1, Korean and Chinese farmers clashed over the construction of irrigation ditch in Wanpaoshan, some 20 kilometers north of Changchun. The Japanese police fired at Chinese farmers, but there were no casualties. But a Korean correspondent in Changchun incited by Japan falsely reported that more than 200 Korean farmers had been killed by some 800 Chinese in an extra. On the next day, another extra was issued, stating that another 200 Koreans were attacked by Chinese farmers. As the sensational report stirred Koreans, anti-Chinese riots spread in Seoul, Pyongyang and Incheon. 142 Chinese people were killed, 546 were injured and 91 went missing.

China’s retaliation for Thaad is intensifying. And the bigger issue is the competition for sensational, and often false, reports by Korean and Chinese media that can lead to physical confrontation.

The essence of the Thaad controversy is the contest between the United States and China to have Korea on their side. As Korea sided with the United States, China asks for a high price out of disappointment.