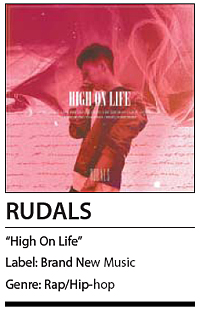 Rudals is an unfamiliar name even to die-hard hip-hop fans. The young rapper is only 19, and doesn’t have many songs to his name. But, the rookie isn’t short on quality. He has been making big strides underground, releasing songs such as “Friends” with rapper MC Gree, and “Go Get ‘Em” with first-generation rapper Bizniz. His prowess isn’t only limited to his skills on the microphone. The Brand New Music trainee-turned-rapper participated on all the tracks on his mixtape “High On Life,” writing lyrics, composing music, recording, mixing and also coming up with the album artwork himself.

“High On Life” is his official breakthrough into the industry following a host of free singles on music sharing service Soundcloud and an appearance on Mnet’s “High School Rapper.”

The rapper shows maturity far above his age, while showing swagger typical of a budding artist. He boasts his skills on the microphone, while also showing off his ability to produce his own songs.

He shows respect to hip-hop greats that came before him in “C.R.E.A.M.,” a direct reference to Wu-Tang Clan.