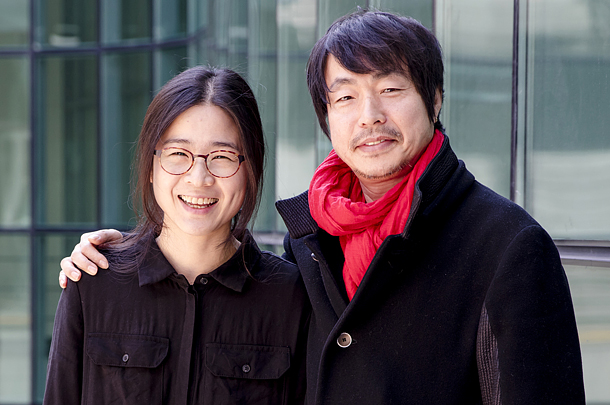 Koreans are all too familiar with the folk tale of the two brothers Heungbu and Nolbu. But they’ll be surprised to find out how refreshingly different the old tale has become after getting tweaked and twisted by the famous playwright Ko Seon-woong for the National Changgeuk Company’s upcoming production of “Mr. Heungbo.” (The names of the brothers are more widely known as Heungbu and Nolbu, but pansori (narrative singing) experts insist that the original name is Heungbo and Nolbo.)

It’s Ko’s second attempt in rewriting a story for changgeuk (traditional Korean opera). Ko was highly praised by critics after the National Changgeuk Company’s staging of “Madame Ong” in 2014, for its witty storyline that contributed in attracting younger Korean audiences to a changgeuk theater.

“Because ‘Madame Ong’ was quite successful, I was hesitant to do another changgeuk. Because the second time may not be as good as the first,” said Ko. “But I decided to do it because it was about Heungbu and Nolbu. I wanted to toss a question to the audience if it’s really a loss to do good, and be a good hearted man.”

The tale is based on “Heungboga,” one of five surviving pansori stories. The company’s artistic director Kim Seong-nyeo has been reviving the surviving pieces since her appointment in 2012.

So far, she’s managed to stage three of them. After the upcoming “Mr. Heungbo,” she is left with the most famous “Simcheongga” to work on as the final piece of her project.

“When Ko sent me the first draft for ‘Madame Ong,’ I remember telling the press that it only took me an hour to read through as it was so interesting,” Kim said. “This time too, it only took me about 40 minutes because I just couldn’t stop.”

Lee Jaram, who’s been an active pansori soloist, joined the team not as a singer but as music director.

“Working behind the stage rather than on it, is quite new for me, but I’m having a wonderful time,” said Lee. “The pansori songs I wrote for the upcoming piece will sound quite refreshing as I’ve mixed the original Korean sounds with modern electronic sounds to help tell the new storyline.”

Changgeuk “Mr. Heungbo” will run from April 5 to 16 at the Daloreum theater of the National Theater of Korea in central Seoul. The performance starts at 3 p.m. on Tuesdays, Wednesdays, Saturdays and Sundays and at 8 p.m. on Thursdays and Fridays. There are no performances on Mondays. Tickets range from 20,000 won ($17.39) to 50,000 won.