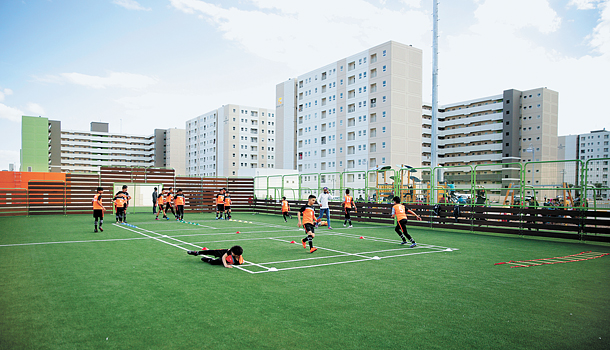 Hanwha Engineering & Construction has completed part of Bismayah New City, and many facilities, such as football fields, are currently in use. [HANWHA E&C]

Hanwha Engineering & Construction’s Bismayah New City Project has been receiving accolades from the people of Iraq.

Not only is the quality of housing outstanding but also the area is evolving into a Korean-style city, with a well-established infrastructure and public facilities.

The Bismayah New City is a project to build housing and a community near Baghdad for about 100,000 households. The cumulative amount of construction contracts have reached over $10 billion (or over 11 trillion won), and the project is 32 percent completed.

The city is modeled after new cities in Korea, including the housing construction, filtration plants, parks, underground electric wires and water supply facilities.

Moreover, it is building public facilities like schools, hospitals, police stations, fire departments and day-care centers based on a thorough plan. Some of the schools and the community health center have been completed and have already begun their operations.

As the modern city gradually unveils itself, the residents have expressed their satisfaction. One resident said, “The quality of the housing is incredible, and I am very happy about the green space and wide roads. I appreciate the Korean company that is doing its best to provide us with the best living space.”

Another resident said, “Bismayah New City is well known on the internet as a safe, comfortable city. Its popularity is growing day by day.”

Starting with the successful Bismayah project, Hanwha plans to sign more contracts to develop more cities in the Middle East and Southeast Asia.