After dogs left behind in the Blue House, officials dodge responsibility

After dogs left behind in the Blue House, officials dodge responsibility 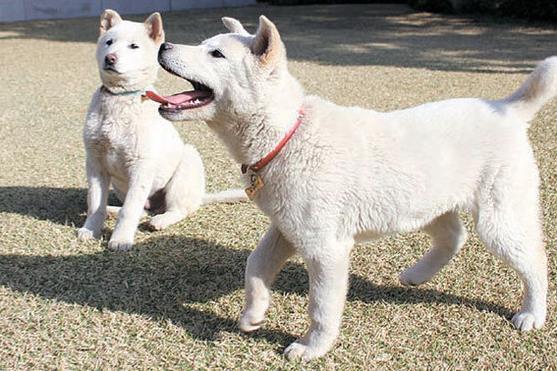 A Jindo dog which was born and raised in the Blue House.[BLUE HOUSE]

After being left behind by impeached former President Park Geun-hye, the fate of nine dogs at the Blue House is now unknown, as local authorities are refusing to get involved.

All nine dogs are Jindo, including Heemang and Saerom, the parents of the other seven. Only the parents, a gift to Park by local residents in 2013, are registered as Park’s dogs at the Jongno District Office in central Seoul.

"The seven puppies were born while the former president was suspended from her duties,” said Blue House Spokesman Jung Youn-guk in a press conference on Monday. “We are trying to find the best way to open them up to adoption while preserving their Jindo pedigree.”

While the Blue House announced that the dogs will be open for adoption to ordinary citizens soon, an animal protection organization in Busan sued Park for animal neglect and violation of the Animal Protection Act on Monday.

“Park had no intention of keeping the dogs and left the Blue House without making arrangements to find them a new owner,” an employee of the organization told the JoongAng Ilbo. “The Blue House announced the adoption plan only after people found out that she abandoned the dogs.”

Local police said deciding whether an animal is neglected or not should be handled by the Ministry of the Interior, but the ministry denied this.

“The Ministry of Agriculture, Food and Rural Affairs decides whether an animal has been neglected and manages the legal procedures that follow,” said an official of the Interior Ministry. “We merely take care of fines once they are issued to violators.”

The Ministry of Agriculture, Food and Rural Affairs, however, also denied having any responsibility.

“Local district offices are the ones that register animals to owners,” said an official of the Ministry of Agriculture, Food and Rural Affairs, “so they are the ones to manage ownership affairs of neglected animals.”

But the Jongno District Office denied having received any report of Heemang and Saerom being neglected.

“We have not received a single report that the Jindo dogs left behind by Park are not being fed or are being neglected,” said an official at the district office. “It’s hard to say that the dogs have been neglected, when the staff members at the Blue House are likely taking care of the dogs.”

According to the Animal Protection Act, either Park or the new owner must report a change of ownership within 30 days of Park leaving the Blue House. If no such action is taken within the 30 days, Park will be fined.

An animal protection agency called Care, which is based in Seoul, posted on its Facebook page that it would like to help find the dogs the right owners.

Heemang and Saerom had previously given birth to five puppies in 2015, which were all adopted by ordinary citizens that year. Their current litter was born in January of this year.

Park was impeached over a corruption scandal involving her longtime friend, Choi Soon-sil, who was indicted and is accused of meddling in state affairs and extracting bribes from conglomerates via Park. Choi reportedly even had a hand in how Saerom and Heemang got their names, according to a testimony by Park’s secretary Jeong Ho-seong, who has been indicted for leaking state secrets to Choi.

“The [former] president sent a selection of names to Choi through me,” Jeong told prosecution. “But I cannot remember which ones she chose.”