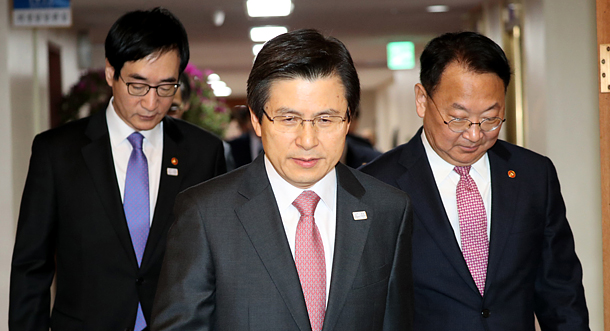 Prime Minister Hwang Kyo-ahn, who is acting president, center, walks into a conference room in the Central Government Complex in central Seoul on Tuesday to preside over a Cabinet meeting. [YONHAP]

Prime Minister Hwang Kyo-ahn, who is acting president, on Tuesday turned down resignations offered en masse by top Blue House officials, including those by the chief of staff and head of the national security office, to prevent an administrative vacuum.

“Taking into account the grave situation of national security and the economy,” a Hwang aide said, “Hwang sent back their resignations in order to prevent an administrative vacuum and to conclude urgent issues.”

The post of senior policy coordination secretary remained vacant, since An Chong-bum resigned over the corruption and abuse of power scandal that led to the president’s removal. An is currently involved in his own criminal trial for having assisted the alleged crimes committed by Park and her associate, Choi Soon-sil.

The Blue House secretariat is expected to support the acting president until the next administration is launched. It remains to be decided when the election will take place, as Hwang is yet to make a decision.

Under the law governing the presidential impeachment and subsequent vacancy, a by-election must take place within 60 days of the Friday ruling. Hwang has until Monday to announce the election day.

Speculations were high that May 9 will be selected as the election day, and the decision will be approved at the cabinet meeting on Tuesday. But the issue was not discussed.

The delayed decision fuels speculations that Hwang is contemplating a presidential bid. If Hwang wants to run, he must step down 30 days before the election. If the presidential election takes place on May 9, he must resign by April 10.

Hwang’s popularity is high among the supporters of the conservative Liberty Korea Party, once headed by Park, and they created a primary rule considered favorable to him. The cutoff outcome of the primary will be announced on April 18, but additional candidate registration will be allowed until April 28, opening a way for Hwang to join the race to win the nomination.

“If Hwang is delaying the announcement of the presidential election because he is focused on making up his mind about his bid, that is hilarious,” said Rep. Woo Sang-ho, floor leader of the main opposition Democratic Party. “He must finalize the date as soon as possible in order to avoid any further misunderstanding.”