Moon and An clash at recent party debate

Moon and An clash at recent party debate 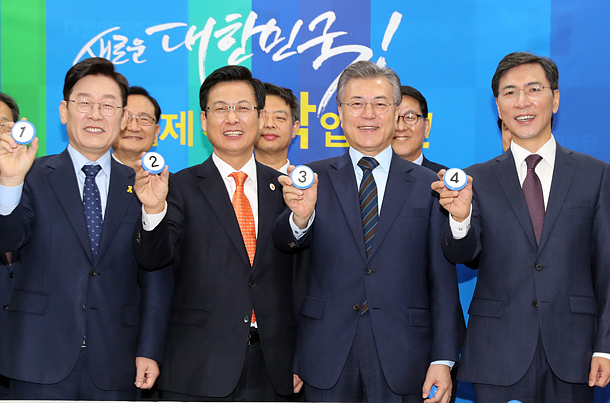 Presidential contenders of the Democratic Party hold a number they each drew by lot at the party headquarters in Yeouido, western Seoul, on Tuesday. The number stands for the candidate in the primary. From left, Seongnam Mayor Lee Jae-myung with No. 1, Goyang Mayor Choi Sung with No. 2, former DP Chairman Moon Jae-in with No. 3, and South Chungcheong Governor An Hee-jung with No. 4. [YONHAP]

The Democratic Party’s presidential frontrunner, Moon Jae-in, and second most popular candidate, An Hee-jung, the governor of South Chungcheong, clashed on Tuesday over An’s promise that he would reach out to conservatives who had worked for former President Park Geun-hye to build a coalition government during the party’s first of three major televised debates.

The first debate among the four DP runners since the Constitutional Court’s historic ruling last Friday to remove Park from power highlighted policy differences between Moon and An.

The DP’s third debate between its four runners - Moon, An, Seongnam Mayor Lee Jae-myung and Goyang Mayor Choi Sung - was held at KBS studios in Seoul.

On An’s position that he is willing to reach out to Park’s supporters, Moon said he could not “understand the logic” behind it.

In rebuking the governor’s call to work with Park’s former supporters, largely lawmakers of the Liberty Korea Party(LKP), Moon said the opposition bloc has enough lawmakers to comprise a majority of the legislature without 94 LKP lawmakers in the currently 298 member assembly.

Seongnam Mayor Lee also criticized An’s position, saying working with Park’s former supporters was no different from covering up their faults over the past four years.

An, however, maintained his position, arguing that without a bipartisan spirit, there would be little policy achievement under the current political landscape. To make his point, the 52-year-old governor cited the National Assembly Act, which requires 180 “yes” votes in the Assembly to put a contested bill on the floor to a vote.

An cited the examples of Abraham Lincoln and Nelson Mandela in his argument for transcending the party lines, asking, “Can we imagine the United States without the history of Lincoln? South Africa without Mandela?”

The differing positions by the two primary candidates has emerged as a potential issue that could affect voters in the primary as the former president indicated her refusal to accept the validity of her removal from power in a brief statement issued on Sunday, in which she said “though it may take time, I believe the truth will eventually prevail.”

Political observers say Park’s lack of contrition could further worsen the public’s sentiment toward Park and the LKP, the former ruling party under the Park administration, which in turn could work against governor An’s promise to reach out to the LKP while benefitting Moon, who has had a tough stance on those who worked for the dismissed president.

Moon and An also differed on the issue of the U.S.-operated antimissile defense system, known as Terminal High Altitude Area Defense (Thaad) system, which has drawn sharp protest from Beijing in the form of economic retaliations.

While Moon said China’s economic retaliations must stop immediately, he called the Park government’s decision to deploy Thaad “wrong,” saying the decision was made without internal discussions and diplomatic efforts to contain damage from it. On the stump Moon has so far not specified whether he is for or against the Thaad deployment but instead only said the issue should be addressed by the incoming administration, thus not ruling out the possibility of dropping the plan.

On the other hand, Governor An said he would send a message to China that the U.S.-Korea alliance would not violate its interest under the premise that the Thaad deployment would be complete as planned now.

The DP is scheduled to choose its nominee on April 3, but if no candidate clinches a majority of voters from party members and the general public, the run-off contest will be held on April 8 between the two candidates who earned the most votes from the first round.

As of Tuesday, the DP has received more than 1.7 million voter registrations from party members and non-party members. It expects to see the number reach as many as 2.5 million by March 21, when it will stop accepting them. Considering the party has about 195,000 party delegates and members, who are automatically registered to vote, more than 1.5 million non-DP members have registered so far.