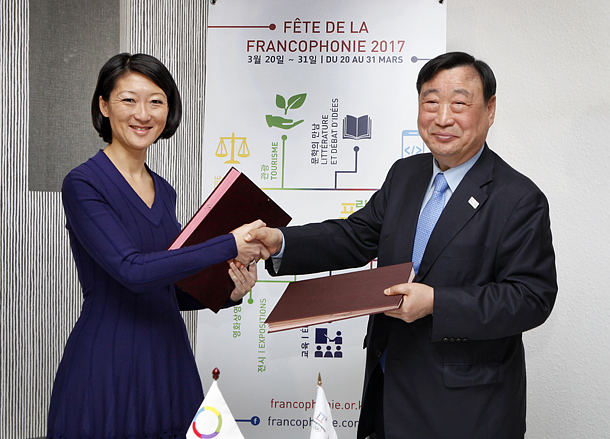 As the Grand Temoin de la Francophonie to promote the use of French during the 2018 PyeongChang Winter Olympics, Korea-born former French Minister of Culture and Communications Fleur Pellerin said all should go well with the preparations for the Olympics despite the recent news of the president’s impeachment here.

“I have no advice to give to the current state of affairs here, but some 700 staff members of the PyeongChang Organizing Committee are working very hard and I know that many Koreans want this event to be a success,” Pellerin told a group of reporters on Monday at the diplomatic residence of the French ambassador in central Seoul. “Brazil went through a similar process two years ago, but was able to host the Olympics without trouble. I think Korea will be able to host a successful Olympics, as well.”

The former French Socialist minister was appointed by the Organisation Internationale de la Francophonie (OIF) as the Grand Temoin de la Francophonie in January. She will be encouraging the use of French, an official language of the Olympics, during the sports events here. “We hope that our experience in promoting the use of French in the Olympics in Korea will provide us further insights into our efforts at the upcoming Olympics in Japan and China,” Pellerin said.

The OIF signed a memorandum of understanding with the PyeongChang Organizing Committee on Monday at the diplomatic residence during the reception. “French is a language loved by Koreans,” said Ambassador Fabien Penone. “The use of French during the Olympics will provide more opportunities for Korea to bridge positive relations with participating French-speaking countries.”

The position of Grand Temoin de la Francophonie has been appointed by the OIF in every Olympics from the Beijing 2008 Summer Olympics. South Korea joined the organization last year as an observer.

“I believe that my position as Grand Temoin will be something like a bridge between Korea and France,” Pellerin said. “I know that there are some 40,000 Koreans learning French here. But personally I think the number of French studying Korean back home might be higher.”

“I would recommend Koreans studying French to watch a lot of French films and dramas,” she said. “To Koreans interested in Paris fashion, I recommend the new series Collection, it’s about fashion designers in Paris in the 1950s. I also recommend the Versailles - it’s a French-Canadian production and has a good mix of action, suspense, treason and such.”

When questioned by the reporters on whether she has any advice for Koreans who find French a difficult language to learn, Pellerin said, “Actually, French comes off as a difficult language for some of us French, too. I think the feeling is mutual on my side, at least, as I find learning Korean quite difficult, too.”