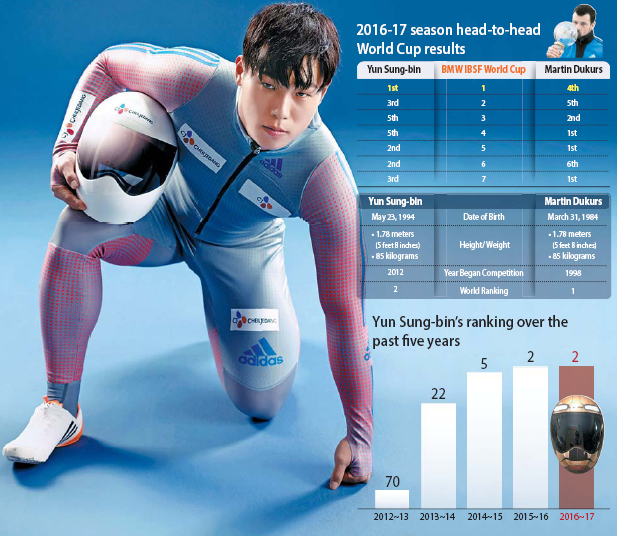 The top two skeleton racers meet again in Pyeongchang this weekend as the eighth and the final BMW IBSF World Cup is being hosted at the Alpensia Sliding Center.

Yun Sung-bin, No. 2 in the world in men’s skeleton, is determined to win against veteran skeleton racer Martin Dukurs at home.

When Dukurs of Latvia finalized his 47th Training World Championship Bobsleigh & Skeleton victory in Konigssee, Germany, on Feb. 26, Yun had to watch it on television in Pyeongchang, Gangwon, as he withdrew from the event to spend more time preparing himself at the Alpensia Sliding Center.

Not only was the victory Dukurs’ third consecutive win, it was also his fifth victory of the season.

Despite Dukurs’ success, Yun is focused more on the Olympics, which are now less than a year away.

Yun returned to Korea as soon as he was done with the seventh BMW International Bobsleigh and Skeleton Federation (IBSF) World Cup event on Feb. 7.

After a short break, he started his training with the goal of getting familiar with the PyeongChang Alpensia Sliding Center.

“It’s my first time being in Korea this time of year,” he said, “since I became a skeleton racer.”

To prepare for the event, Yun rode the 1,376 meters length of track about 70 times since October, six times a day at most.

Yun started skeleton unexpectedly in 2012 on his high school sports teacher’s recommendation while he was preparing his application for Korea National Sports University.

After three months into skeleton, Yun made his spot in the national team.

Although Yun finished 16th at the 2014 Sochi Winter Olympics, he slowly made his way up the ranks and won his first gold at the seventh BMW IBSF World Cup in the 2015-16 season.

Within four years of starting skeleton, Yun climbed to second in the world. Of the seven World Cup events in the 2016-17 season, he managed to stand on the podium in five events by winning one gold, two silvers and two bronze.

It only took Yun five years to catch up to Dukurs, who has been in the field for 20 years.

“I think I’m almost at the same level as Dukurs in terms of skill,” Yun said with confidence. “Now, it all comes down to experience.”

Yun added, “Although everyone thought Dukurs was going to win a gold medal at the 2014 Sochi Olympics, Alexander Tretiakov of Russia ended up winning gold.”

He continued, “just as the Russian racer shared his victory with the home crowd, I want to do the same.”

Yun will be racing at the newly built Alpensia Sliding Center on Friday.

In two-man bobsled, pilot Won Yun-jong and brakeman Seo Young-woo will be competing in the World Cup. The duo has won Korea’s first overall bobsled World Cup title in 2015-2016 and hopes to win another at Pyeongchang.

The two-man bobsled World Cup will start on Saturday.

The men’s skeleton race, women’s skeleton, women’s bobsled and four-man bobsled will also be hosted in Pyeongchang over the weekend.