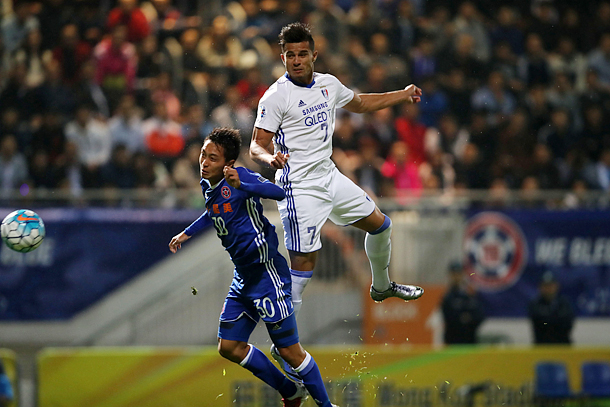 Johnathan scored a goal in the 78th minute to help the Bluwings win its game against the Eastern SC 1-0 at Mongkok Stadium in Hong Kong on Tuesday. [K-LEAGUE]

Suwon remained in second place in Group G with five points. Also Tuesday, Guangzhou Evergrande settled for a 1-1 draw with Kawasaki Frontale at home, but stayed at the top of the group. The Chinese club also has five points but has a tiebreak edge in away goals scored in their head-to-head match.

Earlier Tuesday, another K-League Classic side, Ulsan Hyundai FC, had a scoreless draw with Muangthong United in Group E at home.

After the frustrating draw at Munsu Football Stadium, Ulsan Hyundai remained third in the group with one win, one draw and one loss. Earlier in the day, Kashima Antlers of Japan beat Brisbane Roar of Australia 3-0 to take the lead of Group E with six points.

Suwon outshot Eastern SC 4-0 in the first half, but had nothing to show for their edge. Damir Sovsic’s right-footed shot was denied by Yapp Hung-Fai in the 32nd minute, and Hong Kong goalkeeper stood his ground again two minutes later on Santos’ attempt.

Suwon continued to dominate the ball in the second half, but goals proved elusive, with Kim Min-woo’s header going off target in the 47th minute, and Choi Sung-keun’s shot from outside the box traveling wide right of the net 10 minutes later.

Midfielder Yeom Ki-hun came off the bench to spark the offense in the 58th minute, and one of the K-League’s premier passers made the difference.

Johnathan, who had missed a pair of earlier chances, was the beneficiary of a fine cross by Yeom in the 78th minute, as he soared to head it down past helpless goalkeeper Yapp Hung-Fai.

Suwon and Eastern SC will go at it again on April 12 at Suwon World Cup Stadium.

At Munsu Football Stadium in Ulsan, the hosts made 20 shots against the Thai champions, but only four were on target. Muangthong, meanwhile, shot seven times and two were on target.

Muangthong got their first shot on target just three minutes in, with Chanathip Songkrasin’s right-footed strike.

Ulsan, the 2012 AFC Champions League (ACL) winners, slowly got into their attacking rhythm with Croatian forward Mislav Orsic’s strike in the 27nd minute. In the 33th, Han Seung-gyu’s middle-range effort was tipped away by Muangthong goalkeeper Kawin Thamsatchanan.

Shots then started flying from both ends of the pitch, although none found the back of the net. Ulsan winger Kim In-sung had a promising chance in the first-half extra time with a volley off an Orsic’s cross, but it went straight to Thamsatchanan.

The hosts kept knocking on the door at the start of the second half. Orsic and his compatriot Ivan Kovacec both fired shots just outside the box, but they weren’t enough to produce goals. In the 61st minute, Lee Jong-ho headed down a cross from Lee Ki-je, but went wide left of the net.

Muangthong almost stunned Korean fans in the 67th minute when Teerasil Dangda struck one with his left foot inside the box, but Ulsan goalkeeper Kim Yong-dae got a piece of the ball. Ulsan made some late substitutions, though the new faces failed to make a difference.

Ulsan’s next match is against Kashima at home on April 26. Ulsan lost to the Japanese club 2-0 in their group stage opener last month.