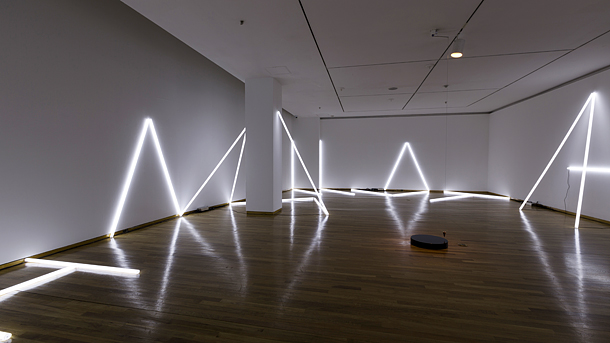 “A Space of the ‘In-Between’: Word, Time, Image” by Shon Kyung-hwa is at the basement level of the Kumho Museum of Art located in central Seoul. [KUMHO MUSEUM OF ART]

Upon entering a dark, mysterious room with LED lights installed on the floor, random noises could be heard in the background. Sounds of pumping, loud sirens and the subway make visitors feel as if they are walking on a busy street. This room is part of an exhibition at the Kumho Museum of Art in central Seoul, displaying pieces by the winners of the 2016 Kumho Young Artist program.

Each of the artists reflects their personal experiences and dilemmas into their art pieces. The struggles they have faced are human experiences that anyone can relate to, such as being a father and feeling like a stranger in a new city.

Choi, who is a new father, mirrors his emotional struggle into his artwork.”

“With the birth of a newborn baby, I feel like the burden tripled three times,” said Choi. As a person who values the concept of household and the importance of family, Choi views family both as a limitation and a source of inspiration for his work. However, even the emotional burdens inspire him, which he has added as part of his process.

A student of the Royal College of Art in the United Kingdom, the keyword of Shon’s space is ‘city.’ Shon studied in Paris, Chicago and London, and was both an insider and outsider in each city.

“I view a city as a complex maze - a place full of secretive codes, incomprehensible fragments, and riddles,” said Shon. This is where she finds the values, emotions, and her source of motivation for her work. Her exhibition, “A Space of the ‘In-Between’: Word, Time, Image,” focuses on the space in-between the cities, and what fills up that space.

Imagination is a critical element of Lee’s piece “Buoy for the Unknown.” Although he has never been to Greenland, he has envisioned and created his own version of the faraway land. “We live in a world where unmanageable amount of information floods us everyday. Therefore, I think we actually do not know about the very space we live in,” said Lee. This is where his imagination kicks in.

Hwang’s piece “Spinning Egg” is based from a paradox known as the “Spinning Egg Paradox,” a concept in physics where if you lay a boiled egg and spin it, the egg actually stands up straight.

This theory goes against gravity, and happens due to the friction between the egg and the table. This resembles the process of our perception not always being correct.