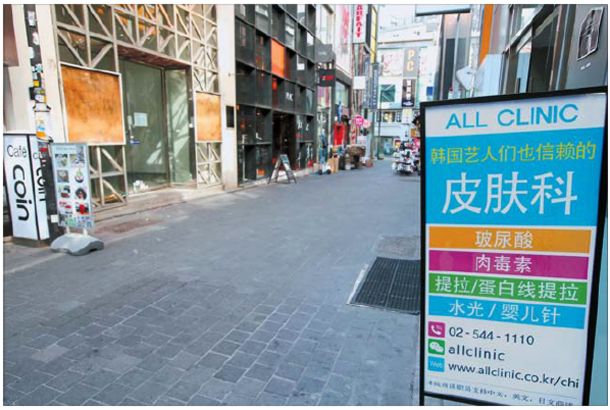 The shopping district of Myeong-dong in central Seoul, a popular destination for Chinese tourists, is empty on Wednesday, the same day the Chinese government began its ban on group travel to Korea. [YONHAP]

Wednesday was a bad day for Korean companies, to say the least.

It was the effective start date of the Chinese government’s ban on group tours to Korea. It was also World Consumer Rights Day, when China’s state broadcaster airs a “60 Minutes”-like news show that exposes shady business practices in the country and often targets international firms operating in China.

The start of Korea Inc.’s woes began with China’s travel ban. Chinese tour agencies that operated trips to Korea completely stopped sales of tour packages on Wednesday on orders from the Chinese government. The move is said to be retaliation against Korea’s decision to deploy an American missile defense system that Beijing sees as a threat to its security.

“We had one team come in today, another small individual group arriving this weekend but after that, our schedule book from China is empty,” said an operator of one Korean travel agency, adding that travel from China had been gradually declining since earlier this month.

“At this time of year, we would have had reservations booked until mid-April, but it’s different this time. It’s literally empty.”

Major Korean air carriers have already begun preparing for the anticipated decline in demand from China. Korean Air and Asiana Airlines both reduced operations on 79 routes to China through April.

Duty-free operators, forecast to be the most heavily hit by the travel ban, say the impact has yet to show in sales figures as Chinese tourists still in the country are keeping them afloat. But many worry things could turn around next week, when results from the ban will likely show.

Wednesday was also World Consumer Rights Day, which the state-run China Central Television usually marks by broadcasting a program exposing companies for their “unfair” business practices. Last year, Apple’s Tim Cook had to apologize after his company was named and shamed on the program, and German automaker Volkswagen decided to recall 380,000 vehicles after it fell victim to barbs.

Korean companies expect to be this year’s target, as they are already facing trade restrictions from the Chinese government ostensibly over the controversial missile defense system. Many experts believe they’ll have the bulls-eye on their back for a while.

“If we look at the dispute between Japan and China over the Senkaku Islands in 2012, China implemented similar measures like the travel ban and boycott against Japanese goods,” said Juhn Jong-kyu, a senior researcher at Samsung Securities. “Given the history, the first three months are the toughest.”

Juhn predicts Korean airlines, casinos and cosmetics companies will be the hardest hit and see profit fall in the next few weeks. “But we expect that China’s retaliation will likely be toned down soon, at least policy wise,” he added, “with the meeting between U.S. President Trump and Chinese President Xi Jinping in early April.”

The Ministry of Trade, Industry and Energy has said it will come up with a 400 billion won ($349.6 million) package to help companies affected by China’s actions.