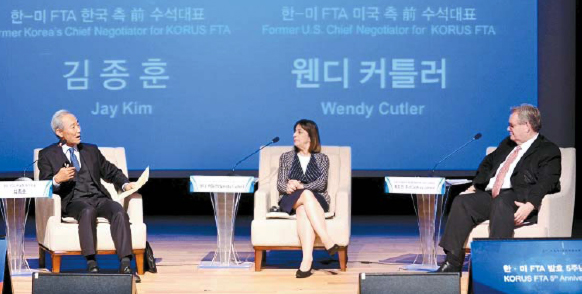 Specialists and officials linked to the U.S.-Korea Free Trade Agreement said that trade relations between Korea and the U.S. should be viewed from a comprehensive perspective rather than focusing on the deficit generated from manufactured goods.

In a ceremony to celebrate the fifth anniversary of the U.S.-Korea pact, former chairmen of the American Chamber of Commerce (Amcham) in Korea and officials of the Korea International Trade Association gathered at COEX in southern Seoul to mark the achievements of both countries since the agreement took effect in 2012.

“The two countries’ trade rose 15 percent from 2011 to 2015, while the global trade dropped 10 percent in the same period. This proves the FTA wasn’t a zero sum but a positive sum for both countries in expanding their pies,” said Joo Hyung-hwan, Minister of Trade, Industry and Energy during his opening speech.

According to a KITA report released this week, both countries expanded their presence in each other’s respective import markets: Korean products exported to the U.S. in 2011 comprised 8.5 percent of U.S. imports and rose to 10.64 percent last year. In Korea, the percentage of U.S. products increased from 2.57 percent to 3.19 percent during the same period.

Korea has been one of the countries that the Trump administration said overly benefited from the FTA based on trade figures. The U.S trade deficit with Korea, in terms of goods and services combined, was $11.7 billion in 2015. Most of the loss came from Korea’s gains in manufactured goods.

Many of the panelists at the seminar, however, said that manufacturing goods was only part of a trade relationship between two countries. “There’s a tendency to fixate on the goods side of the equation [when evaluating trade balance], but we need to take a macro viewpoint to include service and direct investment,” said David Ruch, former chairman for Amcham Korea who served from 2009 to 2010.

On automobile trade, a topic frequently cited as problematic by Trump, KITA Director Lee Dong-bok pointed out that American carmakers’ share in Korea’s imported auto market increased from 9.6 percent in 2011 to 18.1 percent last year, while Europe and Japan both lost ground, shedding 3.7 and 3.4 percentage points each.