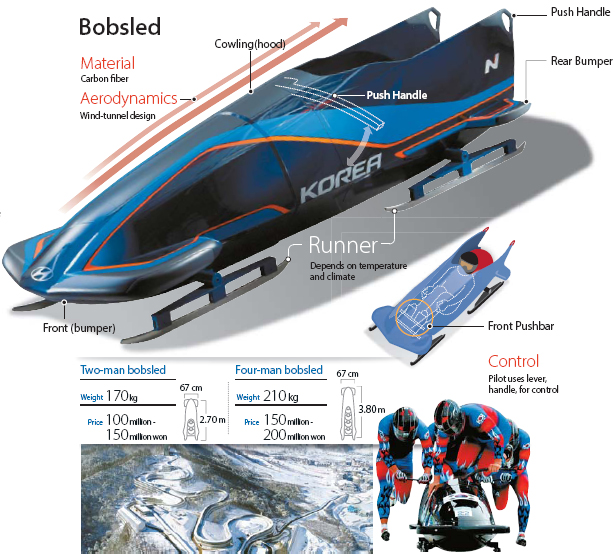 The world’s top bobsled and skeleton racers will be arriving at the Alpensia Sliding Center in Pyeongchang this weekend to compete at the eighth and final BMW IBSF World Cup.

“In bobsled, the sled is as important as the players’ skill,” Kang Kwang-bae, former Korean bobsledder, said.

Bobsledders have to fight against gravity, air pressure and friction within the track while sliding down steep slopes, and the sled designed to fight these barriers is the result of the most advanced scientific technology.

Generally, the bobsled is divided into three parts: body, chassis and runner.

Since the weight including the racers and the sled cannot exceed 630 kilograms, sleds are made with carbon fiber, which is 1,000 times stronger than iron.

Germany, the bobsled powerhouse, has their bobsleds made at the Institute for Research and Development of Sport Equipment (FES). Their production technique remains a secret. Latvia and Canada use equipment from sled-specialized companies.

“There are many similarities in the production of cars and bobsleds, like aerodynamics,” Ludwig Willisch, CEO of BMW of North America, said. “Sled production is an interesting project.”

After having to borrow a sled from foreign countries, Hyundai Motor Company started to produce bobsleds for the Korean national team in 2014. The company has been using the same technology, like 3-D scans and wind tunnels, as in car production.

As the advanced technologies are used in the production of sleds, the price is significant.

“It’s like the difference between regular tires and snow tires,” Lee Yong, coach of the Korean bobsleigh team, said. “For example, Germany has about 100 different runners as in preparation for all sorts of weather conditions.” As of now, the Korean bobsled team has four runners and plan on preparing about 30 runners for the Olympics.

Aside from the equipment, the shipping fee for a sled is costly, as well. Since the sleds are sensitive to vibration, when sleds are shipped to another country for international events, the transfer fee costs about 20 million won per sled.

Other than the importance of equipment, the role of the mechanics is also significant, as they control switching or connecting the right type of runners to a sled. Just as mechanics are in charge of changing tires in F1 racing, bobsled mechanics are required in bobsled racing.

“Bobsledding is a competition of technology and skills,” Kang said. “Mechanics complete the techniques of the sled and the bobsledders.”

Recently, the Korean national bobsled team has been using a simulator. Through the simulator, the team practices in an environment just like the actual event.

“With the simulator, it allowed me to concentrate better, as the screaming brings more tension when we are riding the track during practice,” said Kim Yoo-ran from the Korean women’s bobsled team.