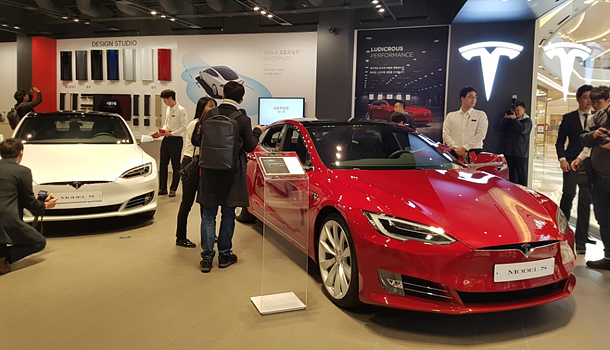 Visitors check out the Tesla showroom at the Starfield Hanam mall in Gyeonggi on its opening day Wednesday. The showroom is the electric carmaker’s first in Korea. [YONHAP]

HANAM, Gyeonggi - It was a typical Wednesday morning at Shinsegae’s sprawling Starfield Hanam mall in this sleepy Seoul suburb, mostly quiet and subdued, save for one store that was packed to the gills with visitors.

It was the first day of Tesla’s inaugural Korean showroom located on the mall’s second floor. Here, two of Tesla’s Model S 90D - one cast in bright red and one in white - are on display for visitors to freely touch and sit inside as staff explain the vehicle’s specs, though many of them would not comment for this article.

Though the queue wasn’t long, the flow of customers was constant. Many were fans of Tesla; some were just curious passersby.

“My two sons bought Tesla vehicles in the U.S. and they are going to bring them in next year,” said a couple in their 60s who made several inquiries to the staff about charging fees and the infrastructure for electric cars in Korea. “We wanted to see the vehicle for real and ask how we are going to charge it once the cars get here.

“The cars are even more fascinating than what we’ve seen online,” they added. “Everything is so high-tech.”

Ahead of the store’s official opening time at 10 a.m., Shinsegae Group Vice Chairman Chung Yong-jin, known for his own keen interest in Tesla, paid a visit to the store.

Tesla’s Korea launch was highly anticipated not only because of the brand’s popularity here but also because the launch was delayed. When the company established its Korea operation early last year, it vowed to open its first showroom in November in partnership with Shinsegae.

But setbacks in the government approval and registration process slowed them down, and Tesla pushed back the opening date to March.

The company’s second showroom in Cheongdam-dong, southern Seoul, will open on Friday.

The showroom in Starfield Hanam, a large American-style shopping mall, inherits the California-based start-up’s strategy of setting up stores inside malls to do away with the image of traditional dealerships that are trained to sell as many cars as possible. The showrooms are designed to be approachable even to those who have little interest in cars, a sort of Apple Store for electric vehicles. The staff have three distinct roles: explaining the car to customers, helping place the order and assisting in delivery of the car. Tesla said this compartmentalization is to help customers more easily access and understand the brand.

Tesla is planning to build five to six superchargers, which take 75 minutes to fully charge a car, within this year. Two will be in Seoul, while the location of the others has yet to be decided. The first supercharger will be at the Grand InterContinental Hotel in southern Seoul. Currently, none of the superchargers have been set up.

In the case of destination chargers, which takes 14 hours for a full charge, 25 locations will be established within this year, six of which have been set up at retail branches of Shinsegae Group, including shopping malls, discount chains and department stores.

Industry sources say more than 1,000 preorders have been placed, but Tesla Korea has not officially confirmed the number.

Test drives kicked off on Wednesday with the showroom opening, and around 10 test drives will be scheduled daily. Deliveries of the car will take place in June.

Shinsegae Group, which signed a partnership with Tesla last year, has high hopes for the electric car brand.

“Shinsegae expects the Tesla showroom to attract a great amount of visitors to our Starfield Hanam mall,” said Jung Hi-won, a spokesman for Shinsegae Department Store. “The Tesla showroom is a unique location that is going to differentiate the mall from others.”