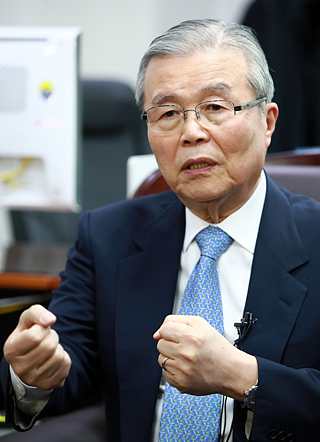 Kim Chong-in, former interim leader of the Democratic Party, hinted that he may jump in the presidential race this month in an interview on Friday with the JoongAng Sunday, an affiliate of the Korea JoongAng Daily.

After leaving the Democratic Party last week, Kim has vigorously pushed for the so-called “third zone big tent,” which is designed to bring together all potential presidential contenders and political factions, except for the Moon Jae-in camp and pro-Park Geun-hye faction, under the one big tent.

In an interview with the JoongAng Sunday on Friday, the day when the Constitutional Court removed Park from office, Kim said, “I have been saying I will keep my word when the situation forces me to run for the presidential race. Not much time is left, as the court made the ruling to dismiss Park today.”

“As there is no sitting president, opposition political parties, for the first time without the ruling party, will compete against one another in the presidential race,” said Kim. “Then candidates themselves will be a much more important factor than their party affiliation.”

Answering the question of whether he wants to become a king or a kingmaker, Kim flatly said, “I have said numerous times that I don’t want to be a kingmaker.”

He believes he can muster political power and field a unified candidate.

Below are edited excerpts from an interview with Kim.


Q. When you were mulling leaving the Democratic Party, did former DP Chairman Moon Jae-in try to hold you back?

A. I have never seen him since we ate together right after the general election in April last year. In the middle, he delivered his message through an intermediary. But that did not mean something to me … I have not received a phone call from him, not even once.


Under the current political situation, Moon has the most potential to become the next president, don’t you think so?

Response rates in recent polls are below five percent. People who are disappointed by the political parties think there is no hope if politics does not reform. They will not respond to poll surveys and will not cast votes.

It is the first presidential election for which only opposition parties compete, as there is no sitting president anymore. I think the race will be candidate versus candidate and person versus person, not party versus party.


Do you think the presidential election will end up as a race between the Democratic Party and the other opposition parties?

I am not talking about political parties. People will choose a candidate who can resolve national conflict and efficiently solve urgent problems related to the economy, diplomacy and security. I don’t think people will cast their votes because they support a certain political party.


What will be emerging issues during the presidential campaign?

The reason why all six presidents, who were elected through direct election, failed is connected with money. By amending the Constitution to adopt the decentralized power system, we have to prevent the next president from exercising absolute power.

Through accomplishing economic democratization, we have to install institutions that can curb certain economically powerful forces from influencing almost all social sectors, such as politics and media.

We have to ask people to pick one of two choices. Electing a president under the existing Constitution and possibly having another failed president.

Or electing an able person who can carry out the constitutional amendment and pioneer a new path to a bright future and pass down a whole new country full of hope to future generations.


Do you think the constitutional amendment is achievable before the presidential election?

I think it’s an easy job if lawmakers have enthusiasm. It is possible if more than 200 lawmakers join the cause. When the opposition parties tried to pass the impeachment motion against President Park in December, it was possible to pass the motion as scores of lawmakers from the ruling party sided with the cause.


What are preconditions for launching a coalition government through the constitutional amendment to introduce decentralized power structure?

If prominent presidential contenders from the Bareun Party and the People’s Party manage some parts of government function, joint political forces can run the coalition government for three years until 2020.

And then the presidential election and general election will be held in 2020 to launch the new political system.

For three years, each party and each presidential hopeful can do their best to earn voters’ support and then be judged by the elections in 2020. Until then, all the parties can compete while each political identity remains intact.


Is it possible to field a unified candidate for the coming election?

I don’t have to talk about this topic if all the presidential contenders want to run. I think they can accept the consensus if they are politicians who want to take care of this country’s future.


When do you plant to make an official announcement of your decision?

Today is March 10. So I don’t have many days left.


Do you intend to go independent?


Do you think you can manage the coalition government and the state affairs as president at this critical juncture?

I don’t think I am incapable of handling it.