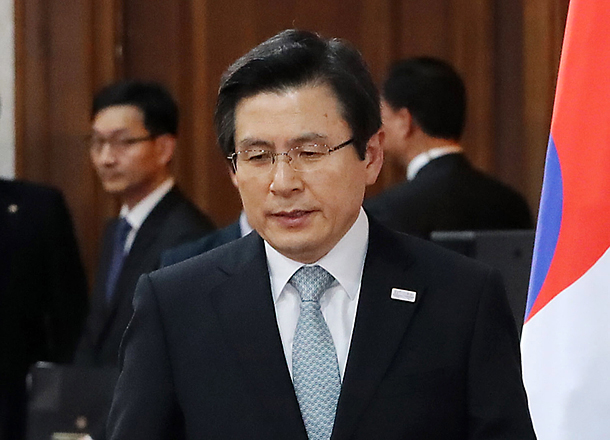 Prime Minister Hwang Kyo-ahn, who is also acting president, announced that he will not run for the presidency on Wednesday. [YONHAP]

Prime Minister Hwang Kyo-ahn, Korea’s acting president since Park Geun-hye’s impeachment, said Wednesday he will not run for the presidency and vowed to manage the election transparently and fairly.

At a cabinet meeting hosted by Hwang, the government confirmed a plan to hold the presidential election on May 9. Interior Minister Hong Yun-sik held a press conference and announced the date. The election day will be designated a holiday.

Park, elected as president in December 2012, began her term in February 2013 and was impeached on Dec. 9, 2016. The Constitutional Court permanently removed Park last Friday for constitutional violations. Under the law governing presidential impeachment and removal, a successor must be elected within 60 days.

In his opening statement at the cabinet meeting, Hwang said the country faces uncertainties in national security and economics in addition to a leadership vacuum.

“I am very aware of the call from some people who hoped for my presidential bid,” Hwang said. “After much consideration, I came to the conclusion that I must not delay or neglect efforts to manage the current crisis and stabilize state affairs. To this end, I concluded that it is inappropriate for me to run in the presidential election.”

Hwang’s popularity has been high among conservative voters, particularly supporters of the Liberty Korea Party, once headed by Park. The party even created an exception to its primary rules to accommodate Hwang.

The Liberty Korea Party said Wednesday it respected Hwang’s decision. It scrapped a clause in the primary rules to accommodate his candidacy. The candidate registration period was also extended to today.

Hwang has consistently scored about 10 percent in opinion polls of possible presidential candidates. He is the second major conservative politician to walk away from the race. Ban Ki-moon, former United Nations secretary general, declared a bid but dropped out in February after only 20 days.

It remains to be seen if conservatives and centrists in the Liberty Korea Party, Bareun Party and People’s Party will form an alliance to produce a single candidate to unite votes against the liberal candidates, including current frontrunner Moon Jae-in of the Democratic Party.

Rep. Yoo Seong-min, a presidential candidate from the Bareun Party, said in an interview Wednesday that it was inappropriate for the parties to come together to hold a joint primary to choose a candidate. Each party must hold a primary, he said, select a candidate and negotiate an alliance to field a single candidate to represent the conservatives.

“Without a unified conservative candidate,” he said, “the upcoming election is a game we are destined to lose.”