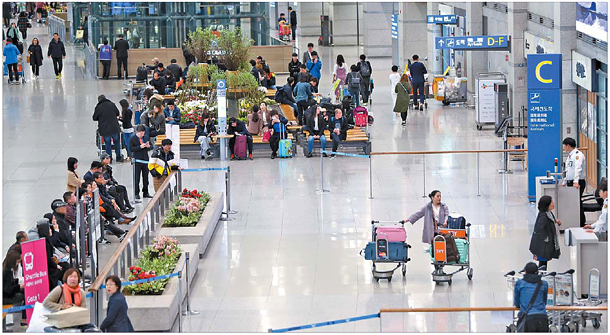 Beijing’s travel ban on Korea went into effect Wednesday, and it showed in the stores on Jeju Island and lanes of Myeongdong in central Seoul.

“I have not sold a single product today,” said a 39-year-old owner of an fashion accessories shop in Jeju. “This is a first in my business here in Jeju, which usually bustles with Chinese tourists.”

Baozen Street in Jeju City, normally packed with Chinese tourists on any given day, was empty Wednesday except a few passersby.

The Lotte Duty Free in central Seoul saw a drastic drop in customers on Monday.

“We have our local customers and those from Southeast Asia,” said Choi Ga-yeon, a manager at the Lotte Duty Free store, “but the drop in the number of Chinese visitors will hit us hard.”

According to Hana Tour, a top travel agency in Korea, only 51 Chinese entered the country Wednesday on its tours. “The 51 are leaving on Monday and from that point it will be very hard to spot a Chinese in Myeong-dong,” said Chung Gi-yoon, head director of Hana Tour.

There are few reservations from Chinese tour groups on ferries traveling to Korea. According to the Incheon Port Authority, two ferries came in on Wednesday morning from China, each less than half full.

“At this rate, we’re going to close down our business in a month,” said Heo Ji-sook, manager of a duty free store at the Cheongju International Airport. “We need daily sales of at least 5 million won to keep a duty free store open.”

“Travel agencies had better change their strategies and change the target countries from China to Japan and Southeast Asia,” said Lee Choong-gi, a professor of tourism at Kyung Hee University in eastern Seoul.

The Seoul-Washington agreement to deploy a U.S.-led antimissile defense system in Korea triggered economic retaliations from the Chinese government in various forms, including the blocking of Korean dramas and movies from being shown in China and safety checks on Korean retail stores.

China’s crackdown is now starting to affect traffic in the opposite direction. Some Korean schools are cancelling trips to China in fear of physical attacks on the students by nationalistic Chinese.

“We see that things are not going so well with China,” said a teacher at Seodo Elementary School in Seocheon, South Chungcheong. “The parents said they’re scared to send their kids to China for a school trip. So we decided to change our destination to another country.”

Daecheol Middle School in South Chungcheong also decided to cancel a school trip to China in May and send the kids to Gangwon Province instead.

In South Chungcheong alone, 14 out of 20 elementary, middle and high schools decided to cancel trips to China this semester, according to the provincial education office. Another six are also reviewing trips scheduled for China and mulling changes.

Twelve high schools in Nonsan decided to switch school trip destinations from China to Osaka. Some 1,600 sophomores were scheduled to visit China in different periods from April to June with the city government’s funding.

“The students will instead visit historical sites in Japan,” said Hwang Myeong-seon, mayor of Nonsan. “The decision was reached after teachers and parents agreed that things are not going so smoothly with China.”

The Chinese government’s ban on travel agencies’ trips to Korea went into effect on Wednesday. But the economic retaliation may not be solely government-led.

A photo posted on a social media platform showed a Korean flag on the floor of the entrance to a motel in China, with Chinese characters printed on it that read, “Step over and kill Koreans.”

Next to the entrance was a sign that read, “Dogs and Koreans not allowed.”

According to the social media user, there was a banner hung outside the motel that read, “We do not play Korean music and oppose Korean culture.”

On Saturday, 3,459 Chinese tourists on a cruise ship visiting Jeju and Fukuoka, Japan, refused to get off the ship to shop in Jeju. They were supposed to shop for eight hours in Jeju but none got off the ship.