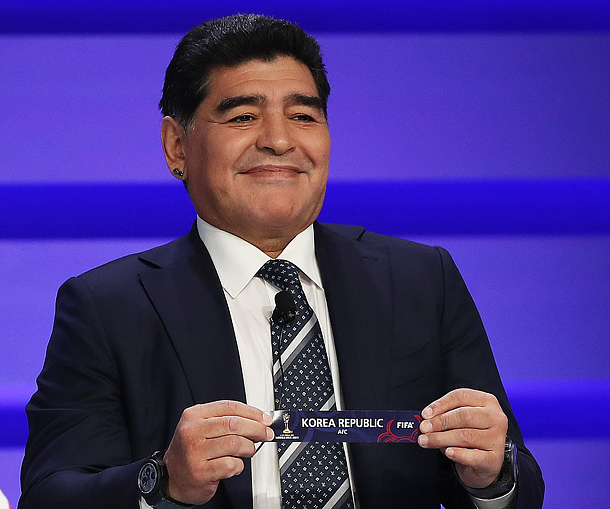 The Korean U-20 football team has been assigned tough teams in Group A as they are paired with Argentina, England and Guinea during the draw ceremony in Suwon on Wednesday.

As Korea was given the first seed in Group A for host country qualification, local audiences continued to sigh as the rest of the countries in the group were being drawn. Diego Maradona, Argentina’s football icon, also had various reactions after each draw.

Unlike Maradona, whose facial expression changed throughout the draw event, Shin Tae-yong, coach of the Korean U-20 football team, was not able to smile at all times during the event.

Looking at the competitor’s records at the FIFA U-20 World Cup, Argentina has won the event six times. Not only that, England and Guinea both qualified in the regional rounds, finishing third in Europe and Africa. Group A is truly the “group of death” in group matches.

“From Argentina to Guinea, there is no such thing as easy teams in our group,” Shin said. “But since the games are hosted at home, we’ll try our best not to disappoint our fans.”

The event, scheduled to start on May 20 until June 11, will be hosted in six different cities - Suwon, Jeonju, Cheonan, Incheon, Daejeon and Jeju - in Korea. The 24 participating teams will be divided into six groups of four and the top two teams from each group will automatically advance to the next round. 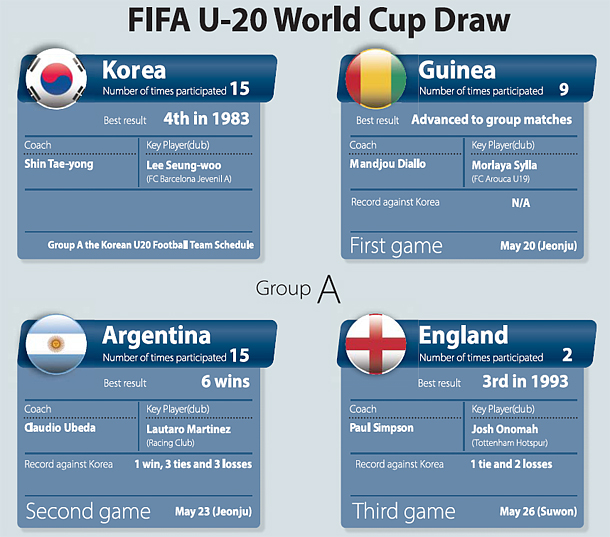 The team’s opening game against Guinea will be the most important as it will take some pressure off of the players in the next two games if they start with a win. To compete against the top team, Lee Seung-woo, attacking midfielder for the FC Barcelona Juvenil A, has been vital to the team. And Shin plans to focus on training Lee as he didn’t have much time to practice with the players on the team.

“Once Lee arrives to the team on Sunday, Lee will play in the four-nation event, friendly tournament, and stay in Korea the majority of the time until the group match to prepare for the World Cup,” Shin said. “He’ll leave to Europe for a little bit to play in the UEFA Youth League semi-finals match but he’ll return right back to Korea.”

Paik Seung-ho, midfielder for the FC Barcelona Juvenil B, will be staying in Korea until the opening game against Guinea.

“Although the Korean team is in a tough position, other teams in Group A will also be concerned to play against the host team,” Cha Bum-geun, deputy chief of the organizing committee said. “Once the team gets through the group match, they may be able to repeat the 2002 World Cup success.”