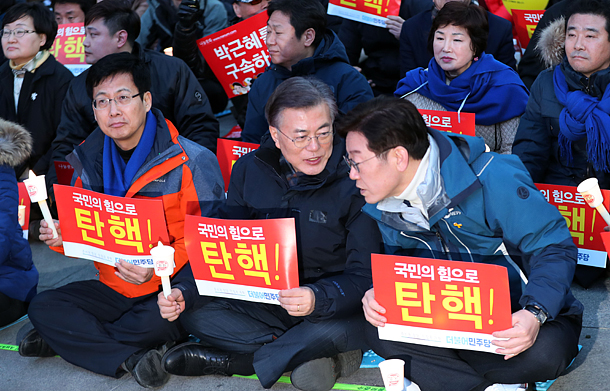 Moon Jae-in, center, former chairman of the Democratic Party and front-runner in polls ahead of the presidential election on May 9, has said, “Whether we like it or not, we must recognize Kim Jong-un as their ruler and as our dialogue partner.” [KIM SEONG-RYONG]

In Korea, security is synonymous with economy. International credit rating agencies focus on the correlation. When representatives from Moody’s, Fitch and S&P visit Korea, they never fail to visit the National Intelligence Service headquarters in Naegok-dong, southern Seoul. The spy agency has designated officials who deal with credit rating. They are the experts who have been watching North Korea for decades.

The annual meeting is attended by officials from the Ministry of Strategy and Finance. A ministry official said, “The main focus of the three credit rating companies is the North Korea risk. They ask if the Korean government and people are confident in security and can control the situation.”

But this year is worrisome. The security topography in the Korean Peninsula is rapidly aggravating, and a change in administration means uncertainty. The centrifugal force of the administration vacuum will grow over the two months of the presidential campaign. I am worried the security situation might hinder the economy when credit rating teams visit this spring between April and June.

As a business news writer, I cannot help but worry about the security of Democratic candidate Moon Jae-in, especially since he is the most promising contender. I’ve seen many businessmen who say they will wrap up their businesses and move abroad if Moon is elected. Moon’s interview with The New York Times last week made me worry. “Whether we like it or not, we must recognize Kim Jong-un as their ruler and as our dialogue partner,” he said. When the remark became controversial, Moon stepped back, “We should never acknowledge the merciless and cruel side revealed in the assassination of Kim Jong-nam. But for pressure or dialogue, we need Kim Jong-un on the other side of the table.”

What does this mean? Kim Jong-un shot his uncle, poisoned his half brother and detained Malaysian people. He is a dictatorial ruler and gangster boss of the Kim dynasty. Proposing a talk with him is like asking a robber with a weapon to talk. Then, the talk will be about “giving what he demands.” Why does he need to say that now?

A double standard is also an issue. Moon was at the forefront of the protest to oust Park Geun-hye. “Revolution is the only option if Park is not impeached,” he said. Moon talks about dialogue with Kim Jong-un while ousting Park. Why does he not say, “North Korean people should dethrone Kim with a civil revolution.” Does he think Park’s faults are more serious than that of Kim Jong-un?

It is not hard to predict how Moon’s side will respond. They will say they are being criticized as pro-Pyongyang. But I wish them to think again. In order to erase his “red” branding, former President Kim Dae-jung held hands with Kim Jong-pil, the very core of the Yusin regime he detested. Kim Dae-jung’s greatest achievement lied in overcoming the foreign currency crisis, and it was possible through a coalition with the United Liberal Democrats. The driving force for the inter-Korean summit and Sunshine Policy came from that.

A majority of citizens say the mission of the next president is security and economy and ask for the values of unity and communication. Given his high support, Moon is the most likely candidate. He should practice these values. All he has to do is talk about unity, healing, security and the economy.

It shouldn’t be so hard. Does he have any reason to adhere to the eradication of corruption and pro-Japanese evils? I’ve heard rumors that the target of eradicating pro-Japanese evil is former President Lee Myung-bak. Moon won’t give up avenging his former boss, the late President Roh Moo-hyun. The political rhetoric could make him take power but won’t help him rule the country.

The three credit rating agencies say in unison that the most important factor in the Korean economy is security. The only yardsticks for them is “the position and will of South Korea to respond to North Korean provocations and threats — rather than a threat itself.”