U.S. rate increase puts Bank of Korea in a bind

U.S. rate increase puts Bank of Korea in a bind 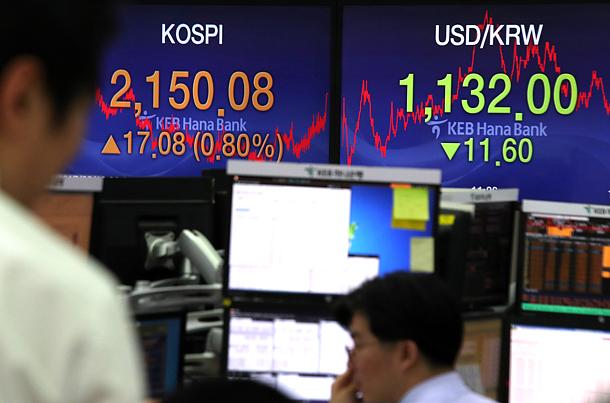 A board at KEB Hana Bank’s headquarters in Myeong-dong, central Seoul, on Thursday shows the Kospi closing at a two-year high, despite the U.S. Federal Reserve raising its key interest rate 0.25 percentage points overnight. [YONHAP]

Korea’s central bank held a meeting on Thursday following the U.S. Federal Reserve’s overnight interest rate increase and said it would closely monitor financial and foreign exchange markets, and make necessary moves to stabilize the market if there is excessive volatility.

“The Bank of Korea will not mechanically raise the key interest rate,” the central bank’s senior deputy governor, Jung Byung-wha, said during the meeting after the Fed decided to raise rates 0.25 percentage points to a range between 0.75 percent and 1 percent. It was the first rate increase in three months.

“Although the U.S. key interest rate is an important indicator that we take reference to, we have to think of our own interest rate,” he said. “Our real economy and market situation are important.”

The deputy governor’s comments echoed those made by the Bank of Korea’s governor, Lee Ju-yeol, late last month in a report to the National Assembly. “We shouldn’t respond in knee-jerk fashion to U.S. interest rate hikes and manage it according to the local situation,” he said. 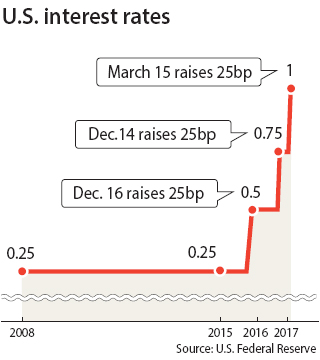 Although Lee said the Bank of Korea still has room to further cut its key interest rate, the move will be difficult considering rising uncertainties from abroad. Keeping Korea’s rate as low as the U.S. raises rates may turn investors away from the Korean market.

As the U.S. rate increase was already expected, the Fed’s announcement didn’t have a huge impact on the Korean financial market. In fact, the benchmark index, the Kospi, bounced back from Wednesday’s breather to gain 17 points, or 0.8 percent, to close at a two-year high of 2,150.08.

Usually when the Fed raises rates, the Seoul market drops out of fear that foreign investors might relocate their investments to Wall Street. However, on Thursday’s market, foreign investors continued net buying Korean stocks for a ninth straight session.

Jung, the deputy governor, said he was not worried about high volatility in the market since the rate increase by the U.S. Fed was already expected.

“In the market, some participants were worried that the U.S. Fed might be raising rates at a faster speed, but the comments by the Fed’s chairwoman, Janet Yellen, were luckily dovish,” he said.

If anything, the Korean market saw the Fed’s announcement as a removal of another uncertainty that was weighing down the economy. Another risk factor recently cleared was the removal of former President Park Geun-hye from office last week.

“Until now, the largest worries in the market were how fast the Federal Reserve would raise interest rates,” said Seo Sang-yong, an analyst at Kiwoom Securities. “But as Yellen has said the Fed will raise interest rates gradually, it will help contribute to foreign investors continuing their net buying of Korean stocks.”

Lee Hyun-joo, an analyst at NH Investment & Securities, said foreign investor activity will help the Kospi advance further and that it will continue to strengthen as Korean companies announce their first-quarter earnings. “The Kospi is still undervalued.”

Although the impact of the U.S. rate increase has been limited, the lack of signals from the Korean central bank on whether it will raise or lower its interest rate is turning into a risk.

Other than repeating that the central bank will continue to monitor the situation and act accordingly, Bank of Korea Governor Lee has not given a clear indication to the market as to which monetary direction it will take, especially as the Fed has already signaled two additional increases coming within this year.

The general market consensus is that the Bank of Korea will likely hold its key interest rate at the 1.25 percent level until next month. But it is in a dilemma, especially as pressure from abroad to raise interest rates continues to grow, while the domestic situation, with declining economic growth and rising household debt, limits how far the bank can push up rates.

Lowering the interest rate could boost the economy, which has recently been impacted by trade retaliation from the Chinese government over deployment of a U.S. missile shield, but this will only further expand household debt, which hit a record-breaking 1,344.3 trillion won ($1.18 trillion) at the end of last year.

But raising rates to prevent foreign investors from exiting the local market could increase consumers’ debt burden, which will lead to a vicious cycle of households cutting back on spending and eventually hurt the domestic economy. Unemployment would rise and investment scale back.

Jung, the deputy governor at the Bank of Korea, said it will continue to stay alert, saying additional rate increases from the Fed in June and September are not inevitable. “New signals could be made in response to wage increases in the United States and American government policies on oil,” he said.

Korea’s vice finance minister, Choi Sang-mok, said its department would continue to monitor the country’s household debt situation and introduce measures within the first half of this year to help manage the debt of self-employed business owners.