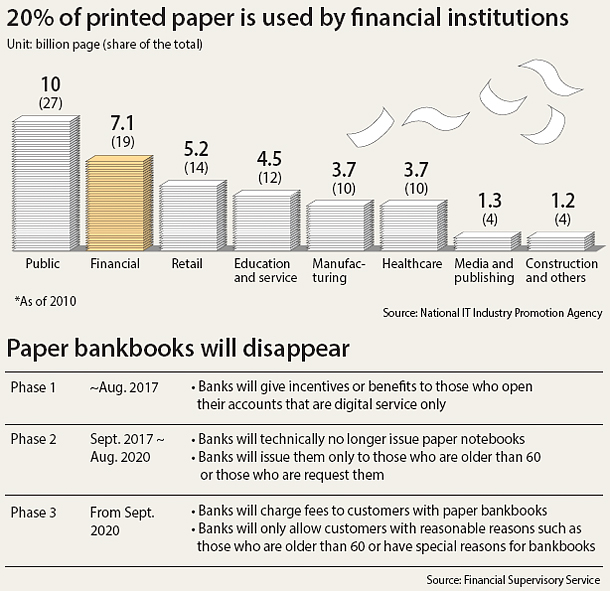 “Please sign the documents on the areas that are highlighted.”

Bank customers in Korea are accustomed to hearing that phrase many times when opening bank accounts or credit cards. Many customers sign the documents without knowing what they are agreeing to.

The experience of signing a bunch of papers at the bank could disappear in near future. Banks will replace traditional paperwork with more digitalized forms using tablets and computers. Many institutions hope this can improve productivity for both banks and customers.

Shinhan Bank began operating digital bank windows in its branches on Monday. The bank has installed 7,000 tablets at bank windows across the country. Customers can now write their names and sign papers on the devices.

Customers opening bank accounts with debit cards have needed to sign their names 28 times on 14-page documents in the past. But they now can sign just five times using the tablet device. This will cut the processing time from 15 minutes to 7 minutes, the bank said.

Shinhan ran a pilot program using tablet devices at some of its branches at the end of last year.

“We thought relatively older customers would prefer using paper documents but they liked the digitalized one more, as many are already used to using their own smartphones, while they also can zoom in when using devices,” said Han Dong-young, a manager at Shinhan. “Bank clerks were also satisfied with the new idea, as some of their jobs that they thought unproductive have been reduced.”

Shinhan said it will be able to save 16 million pages a year, which cost about 600 million won ($522,511), by using tablet devices. Each branch needed to send their documents to the headquarters in Seoul everyday by scanning records, but the digitized records eliminate this process.

Industrial Bank of Korea was the first to adopt the idea of paperless bank windows. The bank distributed tablets to its workers in every branch in December 2015.

The bank used both paper documents and tablet devices but plans to use tablets more often. IBK said much of its daily work is done through tablet devices and that they are saving money from it.

Back then, tablet devices that customers could use to sign documents cost more than 2 million won, so not many banks were able to purchase a large number. As the prices have continued to fall, banks are now purchasing them.

It is not just paper documents that will disappear in the country. Local banks also are now trying to stop using paper banknotes by offering financial benefits such as exempting customers from service charges if they have electronic banknotes.

According to the Financial Supervisory Service, it costs about 300 won to make a paper banknote, but the cost rises to 18,000 won when including managing and labor costs. As of now, banks give out paper banknotes to customers for free when they open new accounts and charge them 2,000 won when they ask for new ones. In the country, paper banknote holders pay about 6 billion won a year to reapply for new banknotes if they are damaged or lost.

The FSS, in fact, announced its plans to reduce the number of paper banknotes issued in 2015. The plan includes not allowing banks to issue paper banknotes to new customers starting in September. But they will make exceptions to customers who are older than 60 and those who really want to have such banknotes.

Starting in September 2020, the FSS will have local banks charge customers who request paper banknotes. This will also grant exceptions to those older than 60.

Paper banknotes were introduced in Korea in 1897. It took about 120 years for the banknotes to start disappearing. But some worry that the change is too radical since more than 70 percent of new customers open up paper banknotes.

“It is true that some Koreans are not feeling comfortable paying charges to get paper banknotes starting from 2020,” said Park Bum-joon, a director at FSS. “We will hear various concerns before actually taking actions.”