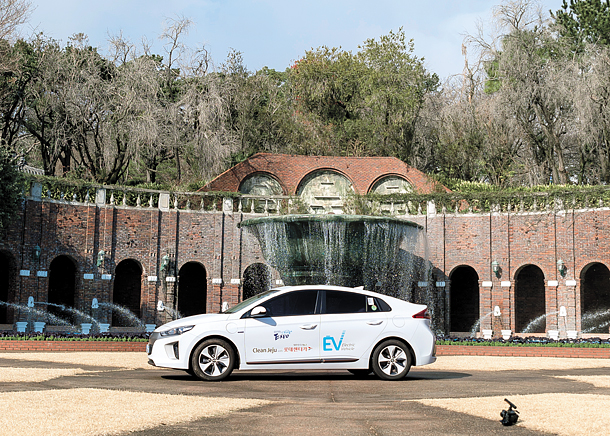 The International Electric Vehicle Expo, now in its fourth year, kicks off today in Jeju with the theme “The Future of EV, Eco-Revolution.” The event will take place in the Jungmun Resort, which includes the Yeomiji Botanical Garden and Jeju International Convention Center, and runs through Thursday.

Three Korean government departments - the Ministry of Trade, Industry and Energy, Ministry of Environment and Ministry of Land, Infrastructure and Transport - are participating, a rare occasion since the three have been working independently on issues related to eco-friendly vehicles.

The venue for the event is quite extraordinary. The botanical garden will serve as the centerpiece, highlighting the expo’s eco-friendly theme. Visitors will be able to see high-tech vehicles in lush natural settings and decorated courtyards.

An official from Renault Samsung Motors, who visited the garden after it had been chosen as the venue, commented that “the location is very suitable for the theme, and I am sure we will be able to have an event just as good as other major motor shows overseas.”

Korea’s minister of trade, industry, and energy, Joo Hyung-hwan, along with Jeju Gov. Won Hee-ryong and South Jeolla Gov. Lee Nak-yeon will be present at the opening ceremony, which starts at 4 p.m. today.

GM’s Chevrolet Bolt is making its Korea debut at the show, Hyundai Motor is presenting its second-generation Ioniq with better mileage and performance, while Renault Samsung Motors is showing off the SM3 and Twizy, a small electric car that holds one to two people. Semi Sysco is introducing Zhidou’s small D2 electric car.

Alongside the exhibitions are conferences on EV technology and basic services, EV standardization and commercialization, new renewable energy, carbon-free islands and green cities. Leading officials and producers of electric vehicles will share information on new technologies and trends in the global EV market. Here, participants can network with peers in related fields and talk to consumers to bolster their brand.

Before the opening ceremony, 28 organizations from Korea and abroad will take part in the EV CEO Summit. The speakers for the opening event are NEXTEV founder William Li and Maximus Ongkili, Malaysia’s energy minister.

There will be 30 sessions throughout the week. In particular, the Ministry of Land, Infrastructure and Transport and Ministry of Trade, Industry and Energy will host an international autonomous driving conference on Tuesday. The event includes a seminar on autonomous and electric car policies. Hyundai’s self-driving car, the Ioniq, which was introduced during this year’s Consumer Electronics Show, will be exhibited at the session.

A forum for EV users will allow local consumers to meet in Jeju and is aimed at encouraging EV use and promoting a healthy driving culture. At the meeting, participants will present various cases of domestic and international EV use.

Cartoonist Lee Jung-woo, who in 1965 depicted the year 2000 as a world with electric cars, video calling phones and robot cleaners, will present on “Carbon-Free Island Jeju in 2030.”

An EV PR show will provide an opportunity for midsize companies to introduce their products and services.

“At the expo, people will witness the newest technology in electric and autonomous cars as well as current trends in the industry,” said Kim Dae-hwan, chairman of the organizing committee, “I am certain that the world will learn about Jeju, the carbon-free island of electric cars, through this event. We will develop this former island of horses into a mecca for electric cars. We also hope that this expo will become a ‘Davos forum for electric cars.’”

In order to encourage more people to use electric cars, the expo is offering free admission to Jeju residents through its website.