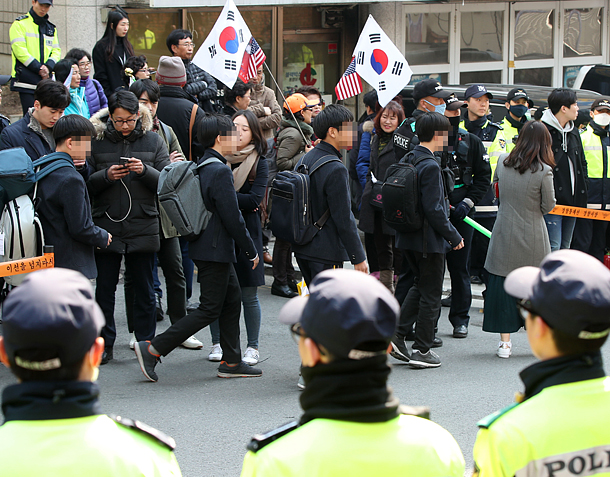 A turf war broke out between supporters of former President Park Geun-hye on Thursday as they rallied in front of her residence every day and night since Sunday, while neighbors complained about the continuing commotion.

Police said Thursday they banned Citizens for One Korea, a conservative civic group supporting Park, from demonstrating about 30 meters (98 feet) from Park’s residence in Samseong-dong, southern Seoul. The group said it wants to hold a rally until April 13.

According to the law governing rallies, police first need to make an attempt to adjust the schedule and location when multiple groups apply to hold rallies in the same place and time. If the attempt fails, authorization will be given to the organizer who applied first.

Although Death Squad’s plan was permitted, police are also considering a plan to restrict rallies because of snowballing complaints by neighbors. Park exited the Blue House in disgrace and returned to her house on Sunday following the Constitutional Court’s ruling to dismiss her on Friday. Since then, supporters have been holding rallies day and night in the neighborhood. The rallies were often loud.

Residents of the nearby area filed a petition to police on Wednesday to ban any rally in the neighborhood, showing concern about the safety of Samneung Elementary School students going to and from school. They asked police to ban the rallies within a 100 meter radius of the school.

While the Constitution guarantees freedom of assembly, the law governing rallies allows police to ban a gathering in a school or residential district when it clearly violates student’s rights or threatens the safety of residents.

The elementary school’s rear gate is near Park’s residence, and students who used the gate now use the front gate to avoid the rallies. Some Park supporters handed national flags to students and lectured them. Some yelled at parents who complained.

“They approached us and said we must receive a good education to be raised as patriots,” a 10-year-old student of the elementary school told the JoongAng Ilbo. “They also told me something about commies.”

Residents are also having a difficult time as reporters are camping in the ally to cover Park and her supporters.

While the rallies continue, Park remains in her house, though she received visits by her hairdressers for three consecutive days since Tuesday. They have regularly seen Park for years, including on the day of the Sewol ferry sinking on April 16, 2014. Park was criticized for nonfeasance during the crucial early hours of the rescue operation, after more than 300 passengers died. Some parts of her whereabouts and actions still remain unknown.