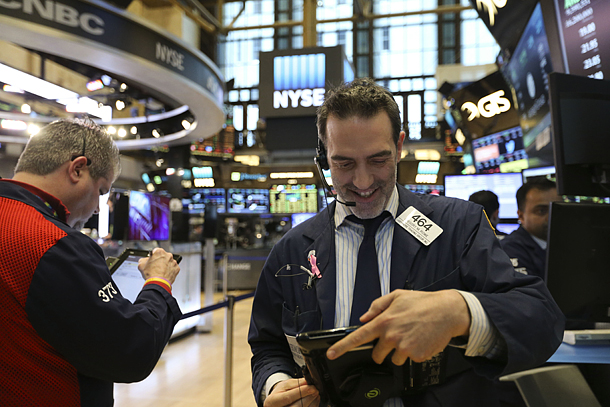 The stock market is hard to understand. Many had predicted a rout across the globe when real estate mogul Donald Trump won the U.S. presidential election. But the aftermath was the opposite. U.S. shares rallied to an all-time high, sending a bull running across both western and eastern hemispheres. Shares rose even when the U.S. Federal Reserve raised the key interest rate on Wednesday and indicated two hikes more this year and three in the following year.

As much as $70 billion of funds have funneled into the global equity market so far this year. The composite indices in key stock markets gained 5 to 10 percent. The craze caught up with the Korean stock market, drawing in 3 trillion won (2.7 billion) in March alone.

What made this year so different? Last year, about $100 billion ebbed out of the global equity market. Yet there are no clear signs that the global market is safely on a solid growth path except that concerns of deflation have been lifted. Most of all, the bellwether U.S. economy is doing well. Inflation is near the 2 percent target and its job status is basically in full employment with jobless rate at 4.7 percent.

The U.S. key rate is now at the range of 0.75 percent to 1.0 percent. The U.S. Fed has indicated the tightening will continue until interest rates are normalized to near 3 percent level in the long run. But the increases will come in an orderly fashion over the span of three years. Governments around the world are continuing with fiscal stimuli including tax cuts to prop up their economies. Equity markets have taken a breather since the second half of 2015 and are ready for another bull run. Profit-making enterprises are also increasing led by players that are making headway towards the fourth industrial revolution through technologies of artificial intelligence, self-driving or self-piloting vehicles and the Internet of Things and robotics.

Producers of materials and components to these innovations are also earning money and drawing stock investment. In Korea, the front runners are Samsung Electronics and Posco. The traditional manufacturers like shipbuilders and domestic-oriented consumer products are doing lackluster as underscored by the polarization in the stock scoreboard.

The global market is expected to maintain an upward trend throughout the year backed by stronger corporate performance and cheap and ample liquidity. The rally in key markets and bluechips are likely to spill over to the emerging and small and mid-sized categories.

But the brisk stock activity offers little comfort to ordinary people and their income standards. This is particularly so for Korea. In the past, stock gains boosted corporate income and led companies to increase hiring and jobs. Wages also rose. People with greater affordability invested in financial assets and spent to help the domestic economy.

But that benign cycle no longer works. Companies do not spend extra money from stock gains on creating jobs. They stack them up in corporate hoards and spend them to buy back and cancel treasury shares to further raise the stock price and returns for shareholders. Samsung Electronics last year used 10 trillion won out of its net profit of 30 trillion won for buyback program. It will use another 10 trillion won for the same scheme. It meanwhile cut workforce by 3,100 last year.

We cannot rely on companies to increase jobs, as it is their freedom to make management choices. The proliferation of artificial intelligence, robotics, and automation will further threaten human jobs. If one cannot find a job at a reputable company, there is only one other option — become a shareholder in it and benefit from its growth.

Retail investors are beginning cash out upon signs of rebound in share prices. Their shares are going to foreigners. It would be wiser to keep to them for long-term security for old age even if they do not provide immediate comforts.

*The author is the manager of newspaper production and head of the Economic Research Institute of the JoongAng Ilbo.