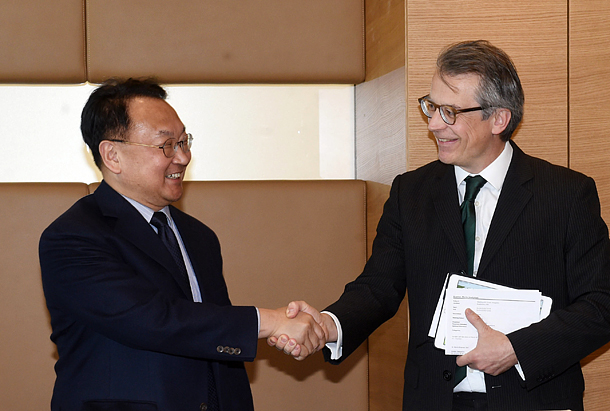 Korea’s Finance Minister Yoo Il-ho met with heads of key credit ratings agencies such as Fith and Standard & Poor’s in Europe and said the Constitutional Court’s decision to remove President Park Geun-hye has limited impact on the country’s credit and economy.

Yoo emphasized that Korea’s exports last month rose by the most in five years and facilities investment, or investments on equipment and machinery, increased for the third consecutive month in January.

“Finance Minister Yoo Il-ho met with James McCormack, heads of sovereign ratings at Fitch, and Standard & Poor’s chief sovereign analyst Moritz Kraemer on Thursday, and thanked them for rating Korea’s credit positively even though they are lowering many other countries’ ratings,” said Min Kyung-sul, a director at the Ministry of Strategy and Finance. “Yoo told them that he will do his best to monitor closely various uncertainties at home and abroad and to react to them when needed.”

According to the Korea’s Finance Ministry, Fitch and S&P said the court’s ruling erased many of the political uncertainties in Korea but showed concerns about the trade relationship with China and high household debt.

“They said the ruling removed many political uncertainties and said the Korean government will be able to stabilize its state affairs through its mature political system,” said Min. “However, they also said the Korean economy faces many risks such as household debt, trade issues with the United States and China and missile tests by North Korea.”

Major global ratings agencies released statements saying that the court’s decision to impeach the president would not affect their ratings on Korea.

“The conclusion of the impeachment process is credit positive for the sovereign because it allows a new president to come in and focus on formulating policies that address Korea’s structural economic challenges amid growing domestic and external headwinds to growth,” Moody’s said in a recent press release. “The judgment brings closer to conclusion a political scandal that began in October 2016 with allegations that Ms. Park had disclosed classified information to her friend Choi Soon-sil.”

Fitch Ratings also said last week, “Political uncertainty appears to have held back economic activity for some time now. The Constitutional Court’s decision to uphold Parliament’s impeachment of President Park paves the way for elections within 60 days and implies that an end to a lengthy period of political uncertainty in Korea may be in sight.”