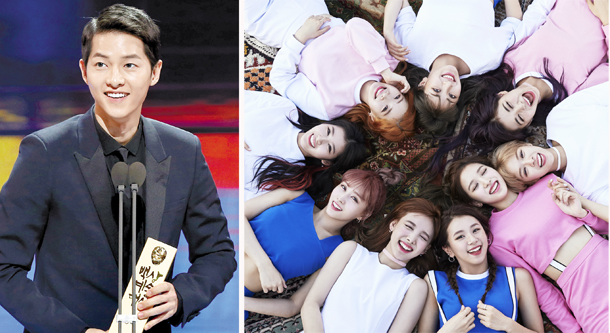 Actor Song Joong-ki and girl group Twice’s efforts last year have been acknowledged by none other than producers and directors at the the 29th Korean PD Awards, which were held yesterday.

The Korean PD Awards are given by the Korean Producers and Directors Association, or the KPDA, where members of the association vote on various fields of entertainment. Song and Twice reportedly won their respective awards even before the awards ceremony, due to a wide margin of votes that left their competition trailing.

Twice was one of the hottest idol groups of the past year, with singles “Cheer Up” and “TT” receiving a lot of praise. The group hasn’t slowed down, with their single “Knock Knock,” released this year, still going strong on the charts.

Song was awarded the prize due to his lead role in last year’s hit drama “Descendants of the Sun.” Although this was his only lead role last year, it was enough to land him the award.