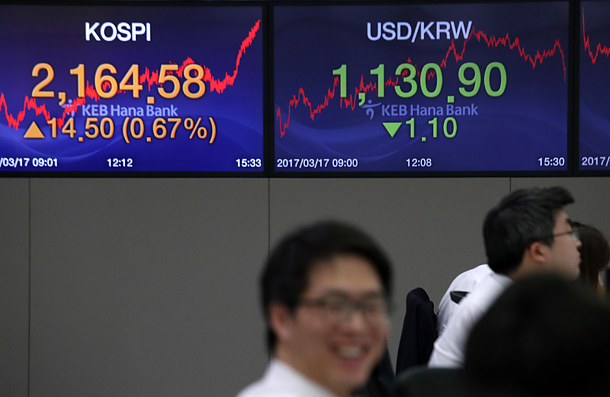 If one wanted a literary metaphor to describe Korea’s two stock indexes, it might be the story of two brothers seeing different fates.

While the main index Kospi is soaring to new heights day by day, its younger sibling, the tech-heavy Kosdaq, is seeing more tepid growth.

The gulf between the two trading boards has widened as the appetite of foreign investors, the main driver of the Kospi’s latest boost, has been centered on large-cap manufacturers like Samsung Electronics, LG Electronics and Posco. Meanwhile, stocks listed on the Kosdaq have been shunned, seen as more susceptible to shocks like China’s recent trade restrictions on Korean companies.

The market capitalization gap between the Kospi and Kosdaq jumped to record highs this week. As of Thursday, the difference stood at 1,193 trillion won ($1.04 trillion). Friday’s data was not available as of press time.

The index gap between the two boards reached a 31-month high of 1,551.3. The rising discrepancy can be explained by an unusually high Kopsi and stagnant Kosdaq.

Seoul’s main bourse hit the highest point in nearly two years on Friday, closing at 2,164.6, as Samsung Electronics, whose market capitalization accounts for a quarter of the Kospi, reached an all-time high.

Meanwhile, the Kosdaq index remained at 613.3 on Friday, down 0.1 percent from the previous session. Entering this year, the Kosdaq lost 2.8 percent while the Kospi advanced 6.4 percent.

One major obstacle the Kosdaq faces is the Chinese government, which has placed limits on Korean imports, including toughening inspections and raising customs standards, ostensibly in protest of Seoul’s decision to deploy a controversial U.S. missile defense system in the region.

“The top players in the Kosdaq market, consisting of media, cosmetics companies and other smaller IT firms, are sensitive to demand in China and different industrial regulations,” said Jeong Da-i, a researcher at Meritz Securities.

Jeong said China’s trade actions are hard to predict and often take place immediately. “That makes smaller companies more vulnerable compared to big companies since they will find it hard to respond or hedge the risks associated with the actions.”

Another major force on the Kosdaq is bio and pharmaceutical companies, but even shares of those companies have plunged due to lackluster development of new drugs and an insider trading scandal last year involving Hanmi Pharmaceutical, the country’s largest drug maker.

“Large drug makers slightly recovered from the plunge since they tend to have a steady revenue stream through copycat drugs of multinational pharmaceutical companies,” said a source in the pharmaceutical industry who declined to be named. “But smaller companies listed on the Kosdaq rarely have major generic products to provide steady revenue, which is necessary at a time when breakthroughs in new drug development are few and far between.”

Bae Sung-young, an analyst at KB Securities, said that a combination of Park Geun-hye’s removal from office, Moody’s steady positive credit rating for Korea and foreign investors’ improved sentiment all contributed to the recent Kospi performance.

“The impeachment decision led to optimistic outlooks for Korea’s democracy,” Bae said, “On the economic front, it boosted expectations that the cozy relationship between politics and corporations and poor corporate governance can be resolved.”