Kelly and family adjust to spotlight

Kelly and family adjust to spotlight 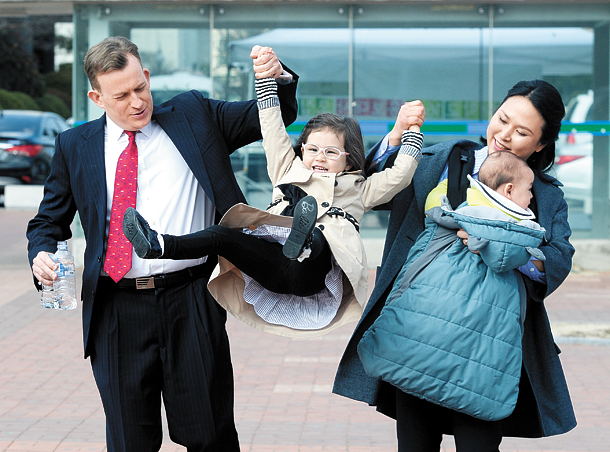 Prof. Robert Kelly of Pusan National University and his wife, Kim Jung-a, stroll around the university campus on Wednesday with their children, Marion and James. The family became world-famous after Marion and James walked in on Kelly’s live interview with BBC News on March 10. [SONG BONG-GEUN]

March 10 may be remembered by Koreans as the first time in its history Korea successfully removed a president from office by impeachment, but for Robert Kelly of Pusan National University and his family, they will remember it as the day the family became world famous.

During his Skype interview with BBC News, in which Kelly was discussing the political implications of Park’s removal, Kelly’s daughter, Marion, and son, James, stormed into the room, catching both Kelly and the BBC News anchor off-guard. Kelly’s wife, Kim Jung-a, then burst into the room and grabbed the children. The BBC anchor later said, “[what a] perfect piece of physical comedy it was.”

The video of Kelly and his family went viral and got over 1 million views on YouTube.

“It’s pretty unreal, we didn’t expect such attention, at all,” said Kelly during his follow-up interview with BBC after the clip went viral. “It got to the point where we had to turn off our phone, Facebook and Twitter.”

He added, “We were worried that BBC would never call us again, that was actually our first response, sort of mortification that we have just completely blown our relationship with you.”

Kelly and Kim were bombarded with interview requests, which made them decide to hold a press conference on Wednesday.

The whole family, including Marion and James, was present at the press interview. But unlike Kelly and Kim, who looked rather serious, Marion and James were as merry as ever, even making funny noises into the microphones. Kim had to give Marion a piece of candy to calm her down.

“I think Marion went into her father’s room after watching him on the television in our living room,” explained Kim during the family’s interview with local media on Wednesday at the university campus. “She doesn’t normally go around the house all dancing like that, but I think the birthday party at the day care center made her really happy.”

When asked if Marion was aware that she and the family had just become world famous, Kim said that although she explained what had happened, she doesn’t think Marion fully grasps it yet.

“We are just a regular family and raising two young children can be a lot of work,” Kelly said. “Because of that, it seems that our video has resonated with parents around the world and we are flattered at the many gentle sentiments about our children.”

Kelly noted in his opening remarks that Kim is his wife, addressing comments by some who assumed she might have been his nanny. Kelly later commented that although he wants to gain recognition through his work rather than the incident, it was because of the incident that he was able to have a press conference.