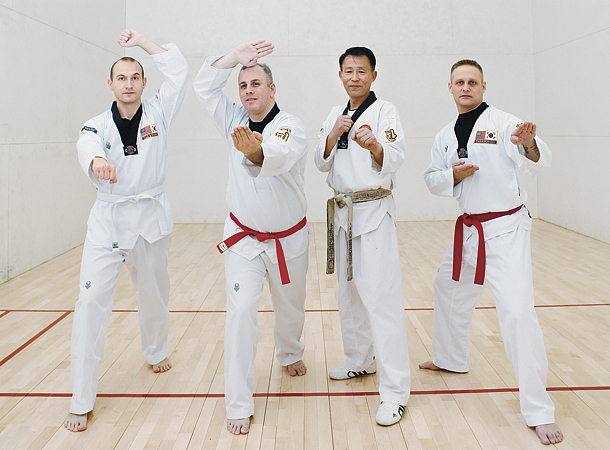 Yun Min-seon, 52, a taekwondo instructor who teaches soldiers at the U.S. Air Force 8th Fighter Wing in Gunsan, North Jeolla, received a text last December from one of his American students.

“Thank you, Master Yun,” said a soldier named Earl, 70, after receiving his first taekwondo dan. Earl learned taekwondo from Yun for a year when he served in Korea. Last year, he passed the test but returned home without hearing the result.

“In June, I want to go back to Korea and earn my second dan,” Earl wrote to Yun.

Since 1990, Yun has trained U.S. soldiers for free, filling in for his older brother, who did the same until he left for America.

Almost one thousand U.S. soldiers have learned taekwondo from Yun. At first, Yun could not speak English. Body language was the only way he could communicate with his students. But he has since learned English and now speaks freely with his students.

Every day except holidays and weekends, he visits the gym on the U.S. Air Force base. From 6:30 to 7:30 p.m., Yun teaches basic forms and sparring. Yun teaches various age groups and ranks, from 19-year-old privates to 50-year-old colonels. But most important of all, he says, are manners.

“The stronger you become, the more you need to respect others, or you can hurt them,” he said. “As all my students are soldiers, they never complained about hard training and have great etiquette. I feel happy when my students understand Korean culture and Korean language from taekwondo.”

Soldiers are not Yun’s only students. His wife, Lee Eun-seon, also learned taekwondo from her husband and now also runs the gym with her husband.