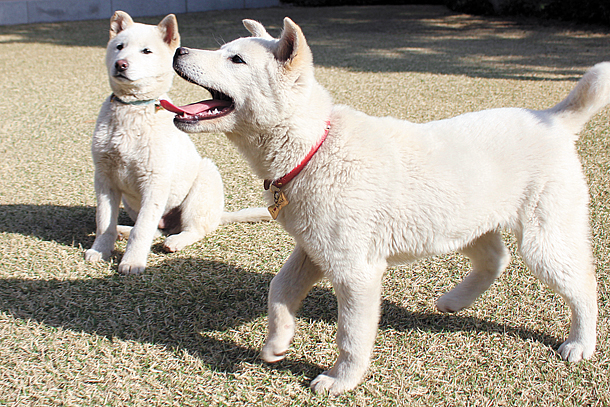 The original owner of the dogs left behind by former President Park Geun-hye told the JoongAng Ilbo that he would like to have what he called the 100 percent purebred Jindos back to register them as national treasures.

“I was sad to find out that Park had left Saerom and Heemang at the Blue House, but my heart breaks over the news that they have been handed over to a Jindo breed preservation association,” Kim Gi-young, 56, told the paper, an affiliate of the Korea JoongAng Daily, on Friday. “If they could be sent to Jindo Island now, I can have them registered as national treasures in no time.”

“Saerom and Heemang, two presidential Jindo dogs, and their two puppies, have been adopted by an organization that works on preserving the Jindo pedigree,” said Kim Dong-jo, spokesman of the Blue House. “The remaining five puppies are being taken care of by staff members of the Blue House and are likely to be adopted by a Jindo preservation association.”

Saerom and Heemang were gifted to the former president in 2013. Their first five puppies were adopted by individuals in 2015. They gave birth to seven more puppies two months ago.

Park did not take the nine dogs with her to her house in Samseong-dong, southern Seoul, when she left the Blue House.

For a Jindo dog to be registered as a national treasure, it must go through a rigorous vetting process when it turns 6 months old. There are some 4,000 Jindo dogs on Jindo Island. Once they are designated as national treasures, they cannot leave the island.

Saerom and Heemang were sold by Kim to his acquaintance, a resident of Samseong-dong, when the dogs were 50 days old. The resident then gave them as gifts to Park when she was inaugurated in 2013.

“Jindo dogs born on Jindo Island can leave the island before they are 6 months old,” Kim said. “I don’t know exactly what process the dogs went through [after they left my hands], but the Jindo dogs were reported as the dogs owned by the Samseong-dong resident and were sent as gifts to Park in February 2013.”

“The Blue House called me and sent me the birth certificate of the dogs and asked me to re-register their names as Saerom and Heemang,” he said. “So I did it and sent the certificates back to the Blue House.”

Kim has been breeding some 30 purebred Jindos for 30 years on the island. He said Saerom and Heemang were born in January 2013.

“Saerom and Heemang are offspring of two purebred Jindo dogs, who are purebred fourth and fifth generation,” Kim said.

The director of an association of preservation of Jindo pedigree based on Jindo Island, Lim Tae-yong, said, “We know it by records that Kim is the owner of Saerom and Heemang’s father, and we can prove this by DNA tests, too, if needed.”

“If Saerom and Heemang can return to the island, they will be designated as national treasures and be protected to preserve their pure pedigree,” Lim said. “There is also a theme park for the pure-breed Jindo dogs on the island and the dogs will be happier here.”

“Park was the owner of the dogs since 2013,” said an employee of the association. “We will not put them up for adoption.”

An animal protection group sued Park for animal neglect on Monday. The Blue House said the dogs are being taken care of by staff members. According to the Animal Protection Act, either Park or the new owner must report a change of ownership within 30 days of Park leaving the Blue House or Park will be fined.