After World Cup, Yun is fast on Dukurs’ heels

After World Cup, Yun is fast on Dukurs’ heels 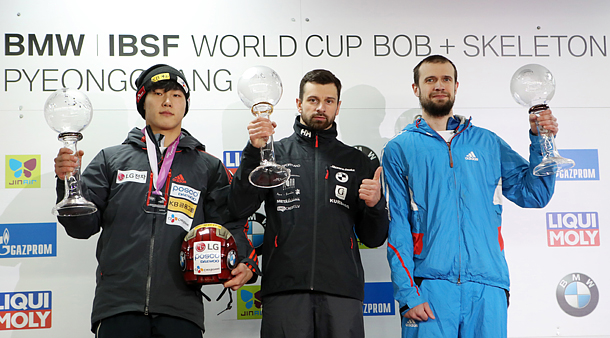 From left, Yun Sung-bin of Korea, Martin Dukurs and Thomas of Latvia pose for a picture during the awards ceremony at the Alpensia Sliding Centre in Pyeongchang, Gangwon, on Friday. [YONHAP]

After finishing second at the final BMW International Bobsleigh & Skeleton Federation (IBSF) World Cup at the Alpensia Sliding Center in Pyeongchang, Gangwon, on Friday, Yun Sung-bin is certain that the key to winning gold at the 2018 PyeongChang Olympics all comes down to home advantage.

On Friday, Yun finished his race with a time of 1:41.52, 0.01 seconds behind Martin Dukurs of Latvia. With his season World Cup ranking score of 1,623 points, Yun also finished second overall in the World Cup ranking, again behind Dukurs, who earned 1,662 points.

“Now I am certain that I can win against Dukurs at the Olympics,” Yun said after the race.

Although Yun had a record of one win and seven losses against Dukurs in 2015 and again in 2016, his head-to-head record against Dukurs has improved and now stands at three wins and five losses.

To avoid having his tactics exposed to other players, Yun trained on the Alpensia track separately.

But Yun needed more experience than that to overcome Dukurs.

Not only did the race require experience on the track, it also showed Yun’s lack of experience in the competition. The two have a large gap in their professional careers, as Yun, considered new to the field, only started in 2012 and Dukurs is a veteran who has been competing since 1998.

Looking at the two’s performances in the event, Yun was leading Dukurs by 0.17 seconds after the first race.

But it didn’t take long for Dukurs to reduce his time by 0.23 seconds in the second race and regain the lead.

He then added, “My ultimate goal is to win a gold medal at the Olympics.”

Yun now has to shave off 0.01 seconds in less than a year to win at the Olympics.

To do this, Yun will have to find the best way to race the track and perfect it at the Olympics through repetitive training.

“We’ll try to have them race on the track about eight times per day at most,” said Lee Yong, head coach of the Korean bobsleigh and skeleton team.