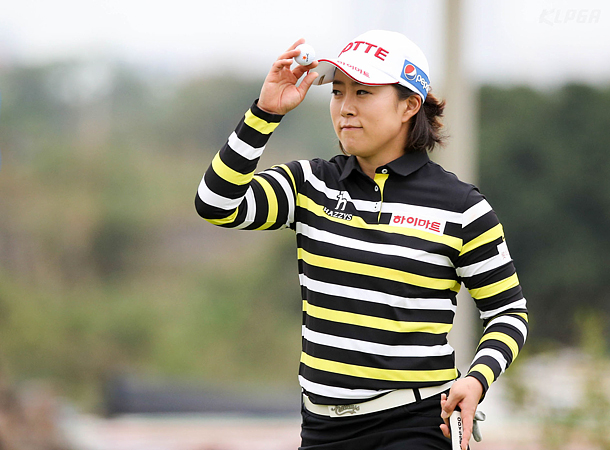 With the final round score of 70, three under par, Kim finished the event with a total score of 205, 14 under par, winning in the second playoff hole against Bae Seon-woo.

Playing early on the second day may have been an advantage for Kim, as she didn’t have to get up early in the morning to complete the second round, which was suspended due to lightning. But it was a long day for Bae, who had to play the last hole in the morning.

Although Kim started the final round with a one shot lead over Bae, their play did not conclude until the second playoff hole.

After the two continued to share the lead and sole lead throughout the round, Kim dropped to second in the standing for the first time on the 12th hole with par 5. However, Kim retook the lead after Bae made a bogey on the 13th hole.

But a bogey on the 14th hole cost Kim - she wasn’t able to bring back the lead until the last hole, when Bae made a bogey as hitting her tee shot into the hazard.

The long day came to a conclusion on the second playoff hole, where Kim made a birdie.

It seemed as if Bae was about to win in the first playoff hole when Kim’s teeshot went into a hazard.

But Kim managed to successfully complete an up and down for par while Bae missed a putt for a birdie, forcing another playoff hole.

Heading into the second playoff hole, Kim made a birdie by making a three foot putt to win the 2017 Ladies Championship.

Kim, who finished ninth in the player of the year award points standing in 2016, played a consistent round over the weekend, making six birdies in all. With the win, Kim captured her third KLPGA tour title.

Kim showed strength in the playoffs as she won two of the three events.

The 54-holes format event was hosted by the KLPGA, Ladies European Tour (LET) as well as the China LPGA tour (CLPGA). All 126 players competed in the event this weekend, 40 players from each tour and six players under invitation.

Although the event had players playing on different tours, KLPGA tour golfers still managed to top the leaderboard as 18 of the top 20 finishers were Koreans.

Ko Jin-young, 2016 player of the year, finished second in scoring average and sixth by shooting 69, four under par, in the final round to finish the event at 209th with 10 under par.

Georgia Hall of England, who plays on the LET, finished tied for third by shooting 70, three under par, in the final round to finish the tournament at 208, 11 under par.

Other than Hall, no other players playing on the CLPGA or LET finished in the top ten.

After a week off, the players will return to the course on April 6 to compete at the Lotte Rent-a-Car Women’s open in Seogwipo, Jeju Island.