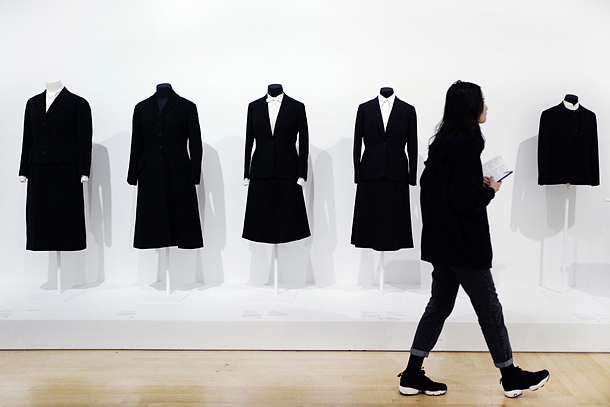 She concluded that O’Keeffe, who made many of her clothes, also was an artist “in her homemaking and self-fashioning.”

Even as a high school student, O’Keeffe avoided popular bows and frills.

Her paintings and clothes reflected a black-and-white palette while she was in New York and desert hues in New Mexico.

There’s a colorful exception from the artist’s New York years: an evening coat from the late 1920s or early 1930s.

The elegant wraparound coat is black with a spritz of white accents at the top. A sophisticated vertical splash with blocks of dark blue, royal blue, maroon, red, orange and yellow flows gracefully toward the hem. It’s actually part of the coat’s lining, but it’s draped in a manner that allows museumgoers to admire it.

The coat is “fastened by a sizeable mother-of-pearl button, her favorite button color and material,” according to the exhibit description. “Though she did not mingle much with the artistic and literary women in Greenwich Village, this is the kind of highly personalized ‘art dress’ they favored.”

Its design incorporates details from the American Arts and Crafts Movement, Corn writes. While it’s not known for certain who created it, she writes, the coat “reiterates elements O’Keeffe favored at this time and these suggest that she was the maker.”

The exhibit runs through July 23.