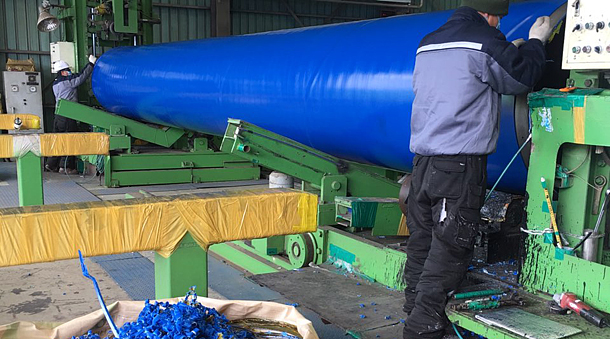 A family-run restaurant that sells noodle soup and Korean pancakes in Jongno District, central Seoul, used to have a few workers who are Chinese of Korean descent, or Korean-Chinese, but those servers are no longer there.

A general manager at the restaurant said his family had no other option but to fire them as there were many complaints from customers about Korean-Chinese workers.

“There were some misunderstandings between Korean-Chinese servers and customers when taking orders and some even said servers were rude to them,” said Kim Dong-hyun. “We hired Korean-Chinese since they are willing to work at relatively lower costs when compared to local workers and they can speak the Korean language as well. But we decided not to hire them anymore even though we will have to spend more money to hire people as we thought it was better not to have them in order to satisfy our customers.”

A recent survey from Gallup Korea demonstrates the change in attitude. The number of Koreans who have negative feelings toward foreign workers outnumbered those who were in favor of them for the first time in 2015. 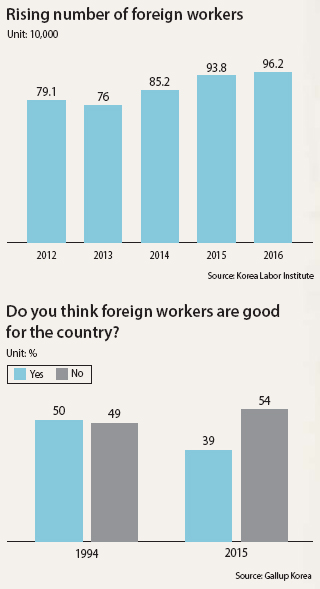 When asked “Generally speaking do you think the immigration of foreign workers is a good thing or a bad thing for the country?” 39 percent of Korean survey respondents said immigration was a good thing. Another 7 percent declined to comment.

The poll said Koreans have more negative feelings toward foreign workers than two decades ago.

In 1994, the last time Gallup conducted the same survey, 50 percent of Korean respondents looked at foreign workers positively and 49 percent looked at them negatively.

“The number of foreign workers in the country started to go up after the country held the Summer Olympics in 1988 and the number went up rapidly since Korea and China normalized their relations in 1992, which led to more number of Chinese who are of Korean heritage to come to the country,” said Gallup Korea.

Gallup surveyed 69 countries and many were pessimistic about foreign workers.

According to the data, China most saw foreign workers as a boost to their country. More than 80 percent of Chinese said the foreign workers are an asset to the country, while only 7 percent viewed them negatively. Pakistan came in second, followed by Ethiopia, Vietnam and Congo. Korea ranked 35, while neighboring Japan’s rank was slightly higher at 25.

“Globalization and the possibilities of travel and relocation divide the world into three groups of countries: Poor countries where the majority supports immigration, the middle and upper Income countries where the majority is in opposition to immigration and the rich whose majorities are divided between supporting and opposing nations,” said Gallup. Korea was categorized under the middle and upper Income countries.

In Korea, there are rising conflicts in the country as some say foreigners are taking away jobs for locals, while others believe foreign workers are essential to the country.

“The negative impact is seen on the local labor market as the foreign workers have started to expand, in particularly those at manufacturing sector that requires less training,” said Lee Kyu-yong, a senior researcher at Korea Labor Institute.

“Salaries of female workers were more affected by foreign workers than male counterparts and those younger than 35 or older than 45 were affected more from them,” said Lee at the KLI.

A 30-year-old male job-seeker surnamed Yoon who majored in Chinese said he regrets his college focus, as he is unable to find work using his language skills because his Chinese is never going to be good as a Korean-Chinese.

“When I entered college about 10 years ago, there was a boom in the country that many people started studying Chinese as their economy was growing rapidly, but I regret following that trend since there already are so many people who are good in Chinese like Korean-Chinese in the country and I am not good enough to find a job in China,” said Yoon.

Lee at the KLI said, “Most of the blue-collar jobs in the country are taken by foreigners through the government’s recent visa policy and this might break the peace of the labor market where youth unemployment is already very high.”

Similar debates are going on globally. The issue of immigrant workers was a key issue when the United Kingdom was debating whether to leave the European Union last year.

“The truth is that it is Brits on low pay - and those out of work - who feel the consequences of uncontrolled migration,” Iain Duncan Smith, the ex-Cabinet Minister and “Brexit” campaigner, told media outlets. “They are forced to compete with millions of people from abroad for jobs, and they suffer downward pressure on their wages.”

Koreans also are not welcoming to foreign workers because they believe foreigners are committing crimes. In fact, crimes committed by foreigners have increased significantly in the country.

According to a Korean Institute of Criminology’s study late last year, the number of foreigners who committed crimes tripled from 13,000 in 2005 to 38,600 in 2014. In the same period, the number of foreigners rose by 240 percent to 6 million to 14.3 million, suggesting the crime rate is growing faster than the growth in foreign residents. Crimes committed by Koreans weren’t included.

A 28-year-old female job-seeker surnamed Won said she was frightened when she ran into number of foreign workers in Ansan, Gyeonggi.

“I went to Ansan to meet my friend and I was really scared after seeing many foreign workers standing out in the street,” she said. “I didn’t run into any trouble with foreigners in my life but I heard a lot of news of them committing crimes. Don’t they take jobs away from us as well?”

Some, however, argue that foreign workers are essential to the country as many Koreans are reluctant to work manual jobs.

When a reporter visited a manufacturing plant for pipe-related products at Boryeong, South Chungcheong, last month, teams of two to three workers were communicating both in Chinese and Korean.

The manufacturing plant has about 20 manual workers and technicians and about half of them hold foreign passports, mostly those issued by the Chinese government.

“I have been working here for more than six years and I am very satisfied with the working conditions as well as wages that I receive,” said a 50-year-old man surnamed Chang from China. Chang, an ethnic Korean, immigrated to the country seven years ago “People treat me well, as I also speak Korean and I help other Chinese who can’t speak Korean as well at the work.”

A Korean manager in his 30s at the plant said it is a win-win for both Korean companies and foreign workers to have them work there.

“There are not many young populations, especially in rural areas like here, and there also aren’t that many young Koreans who are willing to work jobs that are physically difficult,” said a manager surnamed Bae. “Koreans and foreigners also have different mind-sets, where Koreans think they have other places to go when they find jobs at here difficult, while foreigners can’t just leave because they are required to work here to maintain their working visas. Thus, foreigners often work harder than Koreans as some of them hope to extend their visas and are satisfied with their working conditions.

“We absolutely need them to run the factory,” Bae said.

The government said it will reduce the number of visas to non-professional foreign workers this year, as the local labor market continues to be sluggish amid ongoing corporate restructuring and a weak domestic economy.

“I have been working here for the past three years and people treat me well,” said a 30-year-old man from the United States who works at one of the country’s conglomerates. “I also find lots of international food restaurants opening up in the country as well as many foreigners who work here just like me. Isn’t that a good thing?”