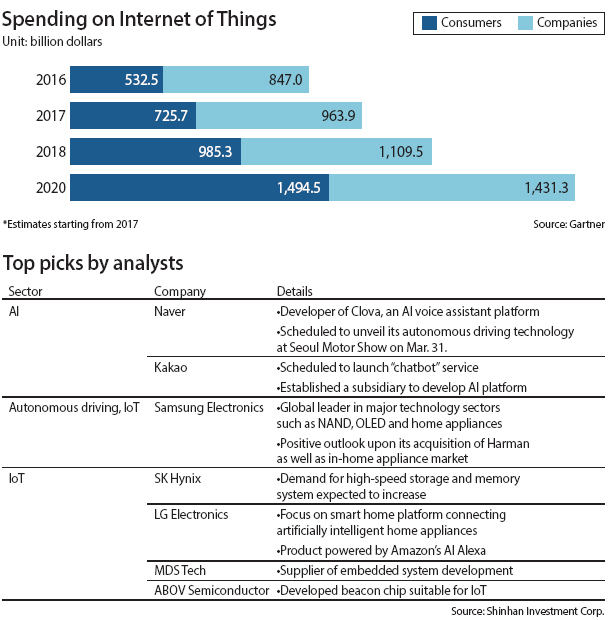 With the presidential election set to take place in just 50 days, any statements or pledges made by major candidates running for the presidency are garnering attention.

The local stock market is no exception and shares of companies related to information and communication technology are the main beneficiaries of the campaign. As late as Tuesday, liberal presidential candidate Ahn Cheol-soo said the nation’s education system should be overhauled to prepare students for the new era of ICT. Local brokerage firms have noticed.

“Candidates have suggested the ‘fourth industrial revolution’ as the key to revitalize the local economy and boost employment,” said Lee Kyung-min, a researcher at Daishin Securities. “Related mid- and small-cap stocks are likely to see their value go up.”

The fourth industrial revolution is a buzzword across the globe these days, referring to the development of ICT expected to affect the everyday lives of people worldwide.

Core technologies include artificial intelligence, internet of things, robotics and autonomous vehicles. Compared to the industrial revolutions of the past, this one will be more about automation of machines across sectors and interconnectivity.

Profits of companies in the sector are promising mainly because of the expanding demand. According to Gartner, an IT research company, the global demand for IoT will more than double in the next few years, from $1.38 trillion last year to $2.92 trillion by 2020. In 2020, Gartner projects that consumer demand ($1.49 trillion) will actually surpass that of companies ($1.43 trillion), another indicator of the growing popularity and need of commercialization of related technologies.

The crux of fourth industrial revolution is the amalgamation of different technologies, which means the applicable scope is substantially broad. Sectors that are likely to be the leading beneficiaries include software, electronics, semiconductors and telecommunications services.

Some of the Korean companies included in the top picks by Shinhan Investment from the local stock market also fell into these categories. In the field of AI, Naver and Kakao, who have either developed or are in the process of developing their own AI platform, were the main players. In the field of IoT chipmaker SK Hynix, home appliance giant Samsung Electronics as well as MDS Tech and ABOV Semiconductor were Shinhan’s picks. The recent acquisition of Harman also bodes well for Samsung in the field of autonomous driving.

“Companies that simultaneously own technology and capital will be highly valued,” said Kim Young-hwan, a strategist at Shinhan Investment. “In the long run, investing in shares for these companies may be good options for regular salarymen to get ready for the future.”

Kim’s analysis can easily be backed up by the recent performance of these companies. So far this year, telecommunications shares have jumped more than 16 percent. The value of electrical and electronics shares has also increased about 14 percent. Samsung Electronics’ share price, which started at about 1.8 million won ($1,590) per share at the onset of the year, surpassed 2 million won at the beginning of March, despite incidents unfavorable to the company and its management such as the arrest of its de factor leader Lee Jae-yong for his alleged involvement in the corruption scandal that led to the ousting of former President Park Geun-hye. Some local analysts, who projected the tech giant’s share will reach its peak at about 2 million won per share, now estimate that it has the potential to go as high as 2.3 million won.

Still, as auspicious as the outlook, there are some limitations with Korean companies in the ICT sector. For one, there is no local company that can be considered as the global “frontrunner” in ICT per se, undermining the global competitiveness of Korea in the fourth industrial revolution.

“Korea is still without a company that can present the nation in the fourth industrial revolution such as China’s DJI, who is the leader in the global drone industry, and Japan’s SoftBank,” said Roh Geun-chang a chief researcher at HMC Investment Securities. “Small and medium-size companies in related sectors are yet to make enough volume of sales to speak of so investing in them could be risky.”

For this reason, shares of ICT companies in advanced countries such as the United States are becoming hot investment products. Kim Hoon-gil, a strategist at Hana Financial Investment, reported, “Boosted by industrial growth and performance improvement, IT companies [of the United States] are showing the highest rate of growth in profit in comparison to others in the S&P500, leading the U.S. as well as the world stock market. Vanguard Information Technology Index Fund (VGT), which distributes investment across the board in U.S. IT sector, is one of the hot items in the market.”

Other than VGT, Robo-Stox Global Robotics and Automation Index ETF, which invests in AI companies in the United States, is recording annual earnings rate of about 40 percent.