A lesson from the Dutch

A lesson from the Dutch 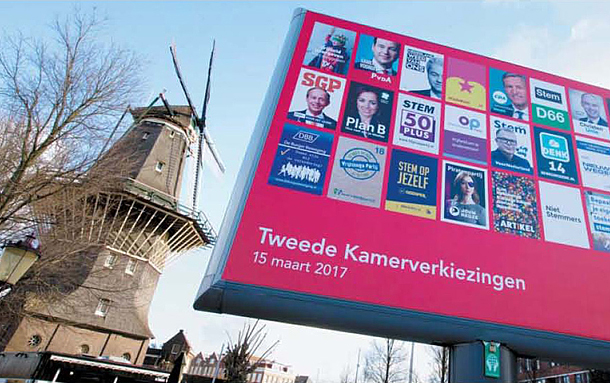 The general election in the Netherlands, one of the three big elections in Europe this year, is over. European leaders were concerned that the far-right populist waves may sweep them up across the Atlantic. As Geert Wilders’ far-right Party for Freedom won only 20 seats in the Parliament, many Europeans were relieved. But Europe is shocked by the crush of the leftist Labor Party (PvdA), which had been one axis of the post-war Dutch politics alongside Prime Minister Mark Rutte’s ruling People’s Party for Freedom and Democracy (VVD). The antagonism of the voters was confirmed in their support for populism and in their anti-establishment sentiment.

Established in 1946, the Labor Party had won 38 seats in the 2012 election, becoming the second largest party after VVD. But in the latest election, it won only nine seats, losing 29, and became the seventh in the Parliament. The PvdA had governed as part of the coalition with the VVD for the past five years. While the VVD is down by eight seats from the previous election, voters’ change of mind was focused on the PvdA. Local media analyzed that the votes of former Labor supporters were divided between Wilders’ Party for Freedom, PVV, and other leftist and centrist minor parties.

The collapse of the PvdA is mainly caused by the discontent of the middle class, whose livelihood became more difficult since the 2008 global financial crisis. The voters who are frustrated by economic inequality and angry at the decrease in social mobility and rising health care cost left the PvdA, said political news outlet Politico.

According to the Netherlands Scientific Council for Government Policy, the Dutch government responded to the financial crisis with tax increases and government spending cuts. While the gap between the rich and the poor grew, the household income of the middle class did not grow. Meanwhile, the healthcare cost paid by the individual before the state health insurance is applied has increased by 50 percent compared to 2008.

After witnessing the collapse of the traditional European welfare system, voters were convinced by far-right politicians like Wilders. The low-educated, low-income class reacted when a surge of immigrants were blamed for their hardships. The immigrant population in the Netherlands is less than 10 percent — around the middle among the EU members. Moreover, the PvdA fell victim to anti-establishment sentiment.

The fate of the mainstream liberals in the Netherlands is not an isolated case. Geert Wilders was not triumphant enough, but the rise of far-right populist candidates in other elections such as the French presidential election should be closely watched. In Korea, the middle class is still struggling and has limited spending power. Despite the tremendous spending on education, the ladder between classes is crumbling.

When calls for welfare increase, the government cannot resort to tax increases. But politicians, conservatives and liberals alike, are making welfare promises for their presidential campaigns. Voters’ support for such political parties and leaders are not over the 30 percent level. If politicians preoccupied with the presidential election cannot come up with solutions for deepening economic disparity, they may collapse like the Dutch Labor Party.

*The author is the London correspondent of the JoongAng Ilbo.