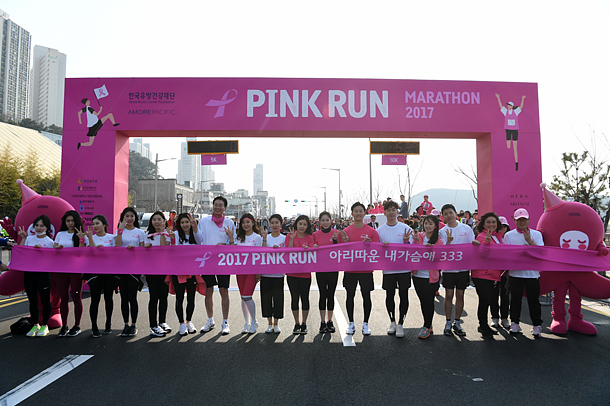 Participants of the 2017 Pink Run, a breast cancer fundraiser organized by AmorePacific, ready themselves to run on Sunday at Dadaepo Beach in Busan. [AMOREPACIFIC]


AmorePacific and the Korea Breast Cancer Foundation kicked off the 17th edition of its flagship breast cancer charity campaign in Busan on Sunday.

The marathon event, newly branded this year as the Pink Run, is the cosmetics giant’s flagship corporate social responsibility activity designed to raise public awareness of breast cancer, one of the most common cancers among women, while improving participants’ health at the same time. It also raises funds for low-income breast cancer patients in Korea.

The campaign has been previously known as the Pink Ribbon Love Marathon.

Some 5,000 people who participated in the event on Sunday ran 5- or 10-km routes along the Dadaepo Beach in Busan and received free breast cancer examinations and consultations afterwards. Makeup-related events hosted by Hera and Aritaum, some of AmorePacific’s cosmetics brands, were held too.

“The Pink Run campaign was able to become one of the leading activities that advocates women’s breast health because of the active participation, including that of the Korea Breast Cancer Foundation,” said Kim Jeong-ho, a director at AmorePacific’s growth support division. “AmorePacific will continue to roll out CSR activities related to women’s health and beauty.”

The Korea Breast Cancer Foundation, which was founded in 2000 with funding from AmorePacific, is Korea’s first non-profit organization dedicated to breast cancer. For the past 16 years, AmorePacific and the foundation’s marathon campaign has raised more than 3.2 billion won.

Following the Busan event, the Pink Run will be held in major cities of Korea throughout the year, including Daegu, Daejeon, Gwangju and Seoul.