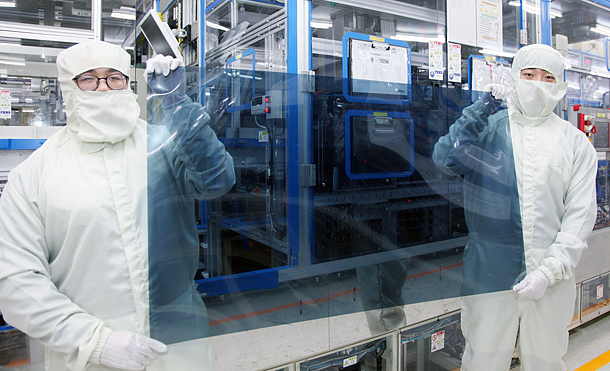 
PAJU, Gyeonggi - LG Electronics has been strengthening ties with its key affiliates to come up with upgraded television products, including its most recent masterpiece released last month - the nano cell television.

The so-called nano cell technology enhances a TV’s color definition by applying a special nanometer substance to its liquid crystal display panel, according to LG.

The nano cell technology is the outcome of five years of research and development in partnership with affiliates, according to the company, and is cost effective compared to using a separate quantum-dot film for each TV.

The technology also reduces color distortion in TV viewing angles and cuts light reflected from TV panels by 30 percent, which means that the display is clear even in bright rooms. By far, it is deemed the most developed color definition enhancing technology for LCD panels, the electronics maker noted.

When the Korea JoongAng Daily visited the Paju plant of LG Display in the northwestern outskirts of Seoul where it makes LCD panels for the nano cell TV on Friday, robotic arms were busily moving 1.95 meters wide by 2.25 meters (6.39 feet by 7.38 feet) long glass panels up and down - the standardized size for seventh generation glass panels.

LCD panels are created by putting two glass panels together with liquid crystal material in between. The back panel is coated with a thin film transistor, which controls each pixel on a display panel, while the front panel is applied with a color filter.

The most delicate process for producing the glass panels is done in the clean room placed on the second floor of the building. The clean room was kept absolutely spotless with no signs of dust or workers.

“Making a good quality display panel is largely about how well you block out alien substances from the manufacturing process,” an LG Display staff member explained.

When these carefully produced panels are added to polarized plates coated with nanometer materials, it becomes a panel used for nano cell TVs.

The technology will be widely used in LG Electronics’ upcoming models.

“Among the more than 30 new super ultra-HD TV models to be released this year, more than half will employ the nano cell technology,” the Korean home appliances maker said in a statement.

According to an IHS report released last month, LG Display still held the No. 1 global spot on shipment of LCD panels for UHD TVs in the fourth quarter of 2016. LG has a market share of 31.1 percent, followed by Samsung with 23.3 percent.