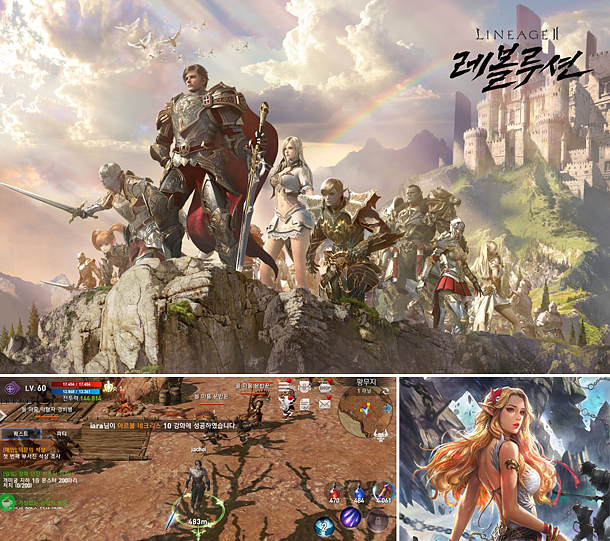 Clockwise from top: A promotional image for Lineage 2: Revolution, a mobile multiplayer online role-playing game released last December by Netmarble, which acquired the rights to the game from NCsoft; a promotional image for Lineage, the first PC game in the series released by NCsoft in 1998; and a screen capture from Lineage 2: Revolution. [NETMARBLE, NCSOFT]

When Korean game developer NCsoft released the PC game Lineage in September 1998, it was considered a pioneer in multiplayer online role-playing games, also known as MMORPG.

Much has changed since then, including the emergence of smartphones as a potential platform for serious gameplay. In early 2015, Netmarble, another major Korean game developer, purchased the rights to the Lineage series and in collaboration with NCsoft brought the medieval fantasy game into the mobile realm.

The result of that partnership was Lineage 2: Revolution, released last December. The mobile game has become one of the most successful in Korea, raking in more than 206 billion won ($181 million) in profit just a month after its release and reviving the Lineage series. Monthly active users reached five million and daily active users 2.15 million, while accumulated playing time totaled over 420 million hours.

News of the game’s success boosted the share price of CJ E&M, which owns a 30 percent stake in Netmarble, to a one-year high of 88,700 won on Jan. 20, when Netmarble disclosed its annual profit.

Lineage 2’s popularity hasn’t dwindled yet. Since topping the sales chart on Google Play two days after its launch, it has refused to climb down from the list. The only time it disappeared from first was during the short-lived run of Pokemon Go at the top and a brief error in the app store’s ranking system earlier this month. On Apple’s App Store, it ranked first in sales just eight hours after release and has stayed there ever since.

Lineage 2: Revolution is, perhaps confusingly so, a prequel to Lineage II and offers a choice from four different classes of characters - a human, elf, dark elf and dwarf - condensed in comparison to Lineage’s eight and Lineage II’s seven.

“We’ve based our game on the series, but we’ve also reinterpreted some of their features,” said Hwang Si-nae, a manager at Netmarble, citing one difference in design of Revolution’s dwarf character, which she says looks “less deformed” in comparison to her cousins.

“The uniqueness of MMORPG comes from the user experience of playing together,” she said, “so we’ve incorporated features such as battles between clans and group boss raids while optimizing them for mobile devices using Unreal Engine 4 to reproduce the Lineage world with the best graphics possible.”

Unreal Engine 4 is a software mechanism created by American game developer Epic Games that provides advanced graphics and scalability. With it, players can see detailed movements of their characters on and off battle.

The variety of quests and content is another notable feature of Revolution. Along with main and side quests, which are also divided into daily and weekly quests, the game provides seven different dungeons that are only open once daily, where users can mine for various items including gold.

With the growing number of enthusiastic gamers, Netmarble has recently made various upgrades, adding new dungeons and expanding the maximum level of characters to 150 from 120.

As a mobile game, Revolution’s user demographics skew younger than its PC predecessors because of its wide accessibility. Unlike previous Lineage games, which were mostly played by people in their 30s and 40s, Revolution is played by people as young as their teens. The game developer now hopes to take its blockbuster hit outside of Korea to overseas markets like China, though it hasn’t specified a timeline for releases yet.

Though Revolution’s platform may be groundbreaking, the Lineage series itself has a long legacy in Korean gaming. NCsoft first introduced Lineage in 1998 based on the storyline of Shin Il-sook’s comic book “Lineage.”

At the time, Korea’s online gaming industry was nascent, largely dominated by Blizzard’s StarCraft and Nexon’s Kingdom of the Winds, and internet connectivity was still mostly done through modem. Nonetheless, 15 months after its launch, Lineage managed to net one million subscribers.

Lee Seung-geun, an engineer from Ulsan and dedicated Lineage fan, remembers coming home from school one day and seeing his angry mother holding up an internet bill for 300,000 won.

“I told my mother that I would play the game just one hour a day before going to bed,” he said, “but I ended up pulling an all-nighter for a few days.”

Thanks to diehard fans like Lee, Lineage’s accumulated profit reached 1 trillion won by 2007, a feat unmatched by any other game in Korea.

Following the tremendous success of Lineage, NCsoft in 2003 released Lineage II, a prequel set 150 years before the original.

The second edition quickly climbed up the charts and scooped up 1 trillion won in profit by 2008. But its popularity petered out after a few years, with some players saying it was too “time-consuming” and “expensive.”

Still, the series managed to maintain a cult-like fan base that has stuck around for nearly two decades. By 2016, accumulated sales of the first-edition Lineage alone totaled 3 trillion won, a clear indication that its user base was still solid.

With the series’ continuous success, NCsoft is preparing to launch its third PC-based Lineage game, Lineage Eternal, set 70 years after first game. One of the main features is adoption of artificial intelligence technology that will generate different content automatically and provide even more individualized gameplay than currently offered. If Revolution’s popularity is an indicator, Eternal will likely get similar positive feedback, industry observers say.

As for Netmarble, after successfully popularizing mobile MMORPG in Korea, it now hopes to popularize the genre of mobile multiplayer online battle arena, or MOBA, through Pentastorm, set to launch in the second quarter. MOBA games are based on a player-vs-player format where two teams of five players battle each other. Each player gets to develop their characters during the match, up to level 16 for Pentastorm, and the degree of development plays a crucial role in which team wins the battle.