The three-story stone pagoda at Jinjeon

The three-story stone pagoda at Jinjeon 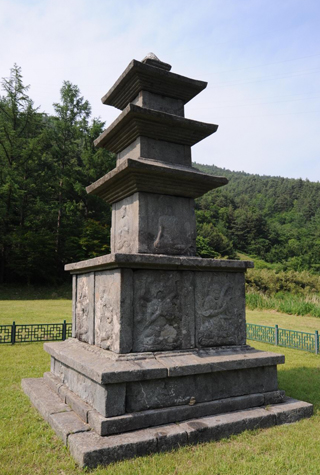 Jinjeon Temple in Yangyang, Gangwon, is said to have been founded by the State Preceptor Doeui in the late 8th century during the Unified Silla Period (676-935).

Roof tile pieces found on the site contain the name Jinjeon, enabling researchers to confirm the name of the temple.

This tower looks like the others dating back to the Unified Silla Period.

The three-story body is placed on the two-tiered platform.

The bottom platform is inscribed with heavenly figures in light and thin clothes.

The top platform contains an inscription of the eight supernatural guardians of the Buddha Dharma holding weapons while seated on clouds.

This is one of the stone pagodas representing the Unified Silla Period, featuring a well-balanced body and the four corners of the roofstones raised slightly, leaving a unique impression.

The exquisite inscriptions made on the first story of the body and the platform make one wonder just how beautiful Jinjeon Temple once was.