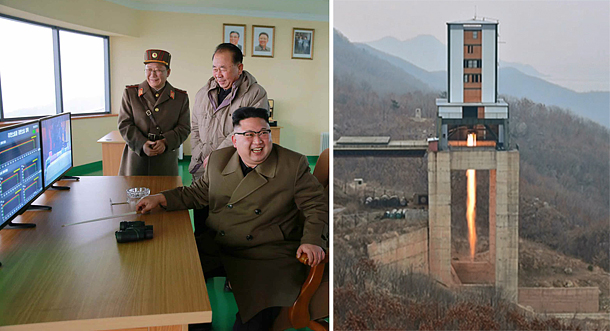 Left: North Korean leader Kim Jong-un celebrates what the North claims is a successful new engine on Saturday at the Sohae Space Center in Tongchang-ri in North Pyongan Province. Right: A high-powered engine is fired during a ground test. [RODONG SINMUN]

North Korea on Sunday said it successfully conducted a ground test of a new high-powered engine using “indigenous technology” the day before, the North’s latest move to bring it closer to completing a long-range missile that could target the U.S. mainland, despite strong warnings from the international community.

The North’s state-run media reported on Sunday that North Korean leader Kim Jong-un observed the test at the Sohae Space Center in Tongchang-ri, North Pyongan Province, adding that he “gave an order” to begin the test on Saturday. The Rodong Sinmun carried eight photos related to the high-thrust engine test on the front page of its Sunday edition, extolling Kim’s leadership in guiding the country in the field of satellite science.

Apparently satisfied with the outcome of the test, Kim is shown in the front-page photo celebrating, surrounded by cheering North Korean officials.

The North, however, did not specify how long the test lasted or how forceful the engine thrust was, as it had in its coverage of the September test.

In an English dispatch by the Korean Central News Agency (KCNA), the North said the test was meant to “confirm the overall technical indices of the engine such as features of thrust power in the combustion chamber, accurate movement of turbine pump, control system” and “structural safety and reliability” of the tested engine.

The KCNA added that the test confirmed the engine’s qualifications, saying it proved “stable maintenance of indices of all systems such as starting and stopping features” of the high-powered engine, which it called a “Korean-style” incorporation of “indigenous technology.”

Continuing to claim that its pursuit of a high-thrust engine is in order to put a satellite in space, a claim that is seen by those outside North Korea as a cover to develop long-range ballistic missiles, the KCNA quoted Kim as saying the new high-thrust engine would “match the world-level satellite delivery capability in the field of outer space development.”

Pyongyang’s Saturday test is the second of its kind in the past year that has been publicly revealed. The North carried out its first ground engine test last September at the same venue.

In contrast to the Sunday reports, which did not go into detail about the engine performance, the North noted then that the September test lasted 200 seconds and that a single engine’s thrust reached a force of 80 tons, which means it could lift an object weighing 80 tons for 200 seconds. The announcement indicated Pyongyang was closer to making a missile capable of flying across the Pacific.

Considering that the North can use four engines in the first rocket stage, it could already have acquired technology from the September test to come up with a missile with a total thrust power of 320 tons, which experts say is enough to reach the continental United States.

One clue as to whether the North has made strides in its engine capability can be found in one of the eight photos published on the Rodong’s front page on Sunday, which shows the engine flame. Compared to a photo from the September test, the flame appears more robust this time.

The North made clear its intention to develop intercontinental ballistic missile (ICBM) technology in face of what it calls threats from the United States. In his New Year address, Kim Jong-un said his country’s ICBM development program was “at its final phase,” raising the prospect of the North’s firing an ICBM missile this year.

Pyongyang’s latest missile engine test came while Washington’s top diplomat, Rex Tillerson, is traveling to three Asian nations - Japan, South Korea and China. Tillerson was in Beijing Saturday meeting with his Chinese counterpart, Wang Yi, to discuss a range of issues such as cooperation between the world’s two biggest economies to curb the North’s nuclear ambitions. Secretary Tillerson said tensions on the peninsula “are quite high” and reached a “rather dangerous level,” during a press conference with minster Yi.

The U.S. diplomat also said Washington and Beijing were committed to “doing everything we can to prevent any type of conflict from breaking out,” adding, “there were a number of steps that we can take … to see if we cannot bring the government in Pyongyang to a place where they want to make a course correction and move away from their development of nuclear weapons.”

China’s foreign minister called on Washington to remain “cool-headed” and stressed diplomatic solutions could be applied to the nuclear gridlock.

On his visit to Seoul Friday, Tillerson proclaimed that the existing policy of strategic patience from the previous Obama administration had “ended,” in a strong indication of the Trump administration’s readiness for a bolder stance against the Pyongyang regime. Under the strategic patience policy, the Obama White House was of the position that it could afford to wait until the North changed its course before it opened any official talks with the communist regime.

Cheong Seong-chang, a senior researcher at the Seong Institute, told the Korea JoongAng Daily that Pyongyang’s timing of the engine test was meant to deliver a message to Washington and Beijing, as it coincided with Tillerson’s three-nation trip in Northeast Asia.

“With its latest engine test,” said Cheong, “Pyongyang made clear its stance that it would never surrender in the face of growing pressure from the U.S. The North also sought to make a case that joint pressure by the U.S. and China would not succeed and that Beijing does not really have much of an impact on the country.”

He added that North Korea is highly likely to either conduct its sixth nuclear test or fire an ICBM missile next month amid rising signs of the North’s preparation for the underground nuclear test.