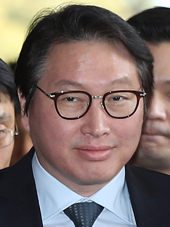 On the eve of questioning former President Park Geun-hye, prosecutors also questioned top executives of SK and Lotte groups over suspicions that they bribed Park during her term in return for special favors.

The special investigation headquarters of the prosecution summoned Chairman Chey Tae-won of SK Group around 2 p.m. on Saturday to answer questions about the allegation that the company bribed Park in return for his special pardon from jail. After a more than 13-hour questioning, Chey left the prosecution around 3:30 a.m. Sunday.

The prosecution is currently looking into the scandal surrounding Park, her confidante, Choi Soon-sil, and the country’s largest business groups. The Constitutional Court permanently removed Park from office earlier this month, after the National Assembly’s impeachment.

A key part of the probe is that Park received bribes using two nonprofit foundations established and controlled by Choi. SK Group contributed 11.1 billion won ($9.81 million) to the foundations.

Suspicions were raised that the donations were in return for various favors, including the arrangement of the presidential pardon of Chey in 2015. After serving two years and seven months of a four-year prison term for embezzlement and corporate malpractice, Chey was pardoned on Aug. 12, 2015. He returned as SK Group chairman in March 2016.

Prosecutors also suspect the conglomerate received special treatment from the administration when it applied for a duty free business license, made a bid for a government-led spectrum auction and attempted to acquire cable company CJ HelloVision.

It was the second time Chey was questioned by prosecutors over the scandal. The first was in November last year, when the prosecution conducted an initial probe.

After last year’s initial probe, prosecutors concluded that Park and Choi colluded and extorted money from conglomerates. The charges, however, were changed to bribery after independent counsel Park Young-soo conducted an investigation and concluded that contributions of large business groups were in return for the government’s support.

The first target was Samsung Group. Its leader, Lee Jae-yong, was detained and indicted on charges of offering bribes worth about 43.3 billion won to Park through Choi.

Top executives of the SK Group had two exclusive meetings with Park. Kim Chang-geun, then the chairman of the SK SUPEX Council, the conglomerate’s top decision-making body, met with Park alone in July 2015, when Chey was still in prison. Chey had a one-on-one meeting with Park in February last year.

During the weekend’s questioning, Chey reportedly denied that the money was in return for any special favor.

In addition to SK Group, prosecutors are planning to look into whether Lotte Group’s contributions were also bribes. Lotte was accused of offering massive funds in return for keeping its duty free business license.

Jang Sun-wook, CEO of Lotte Duty Free, was summoned Sunday as a witness in the probe. Lotte Chairman Shin Dong-bin had a one-on-one meeting with Park in February last year, two months before the government announced the new duty free business winners.

The conglomerate paid 7.5 billion won, in addition to its original 4.3 billion won of donations to Park’s pet projects, but later received the money back.

If the prosecution decides to pursue bribery charges against the two conglomerates, following the legal precedent of Samsung, Chey and Shin are also expected to be prosecuted.

As the prosecution gears up for Tuesday’s questioning of Park by summoning top executives of SK and Lotte to solidify the bribery charges, Park was also preparing for the interrogation. Park is facing 13 charges, including bribery, but has denied all of them.

Her other charges include the creation of a blacklist of artists deemed critical of the administration, oppressing them and leaking confidential Blue House documents to Choi.

Park remained silent since she exited the Blue House in disgrace on March 12 and returned to her home in Samseong-dong, southern Seoul. She created a team of defense lawyers, mostly made of those who represented her during the impeachment.

Lawyer Yoo Yeong-ha, who has defended Park since the prosecution’s initial probe last year, visited her home on Saturday and stayed for more than eight hours, presumably to prepare her for Tuesday’s questioning. Yoo visited her twice last week after the prosecution announced its plan to question her.

Since Tuesday, Park’s hair stylists also made daily visits to the house. They made their sixth visit to Park on Sunday.