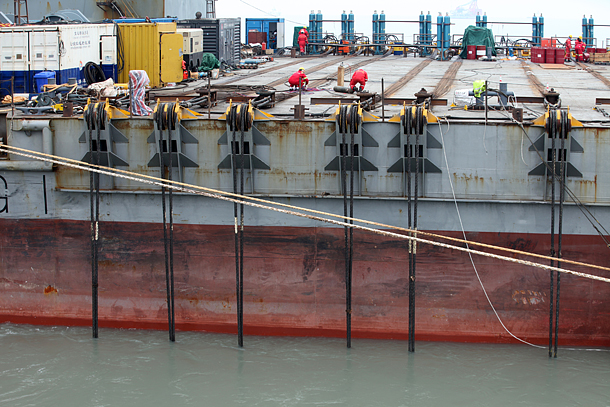 Workers check wires on a barge that will raise the sunken Sewol ferry off the coast of Mokpo, South Jeolla, as the Ministry of Oceans and Fisheries on Sunday completed the final test for salvaging the ferry, which began Friday. [YONHAP]

The South Korean government ran a final test Sunday on its plan to refloat a ferry that sank off the country’s southwestern tip of the peninsula three years ago, a disaster that killed more than 300 people.

The Ministry of Oceans and Fisheries said it completed the final test for salvaging the sunken Sewol ferry later in the day, which it did on the wires that connect two jack-up barges with the hull of the ship to bring it up to the surface. In a joint effort with a Chinese salvage firm, the test initially planned to lift the ferry one to two meters (3.3 to 6.6 feet) from the seabed by using hydraulic pressure, but it was not put into action because of unfavorable weather conditions, the ministry said. They checked the 66 wires on the two barges that will raise the ferry, making sure that they will operate to lift the ship at the same time. Partial repairs have been made on the wires to prevent them from being entangled due to strong underwater tension, the ministry said.

They said the semi-submersible ship on which the recovered ferry will be taken to a port in Mokpo, some 87 kilometers (54 miles) from the site of the accident, has been readied for the move. The semi-submersible will submerge part of itself 26 meters into the sea to take on the Sewol ferry.

On Saturday, the government said it canceled its plan to salvage the ship the following day, citing bad weather. The operation will likely take place April 5, when the next neap tide is expected, according to the ministry.

The operation involves lifting the 145 meter, 6,825-ton ship above the water. Once hoisted, it will be moved onto the semi-submersible ship to a port in Mokpo, with the transportation process likely to take about 20 hours, according to the Coast Guard.