Korea loses 2 matches to Russia, but not without a solid fight

Korea loses 2 matches to Russia, but not without a solid fight 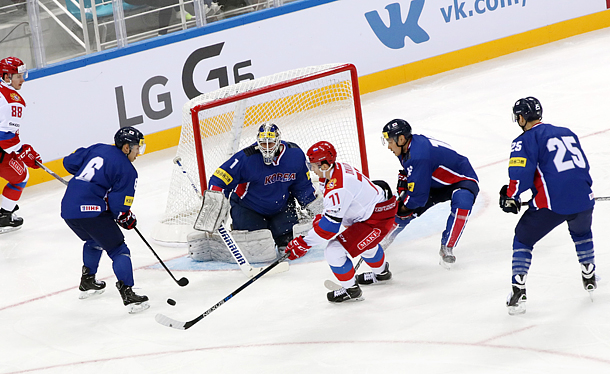 The Korean men’s team plays against Russia at Gangneung Hockey Centre in Gangwon on Sunday. [YONHAP]

Although the Korean men’s ice hockey team lost its friendly matches 4-3 and 5-2 over the weekend, the team fought well against Russia, the second-ranked team in the world, at the Gangneung Hockey Centre in Gangwon.

Russia is in the top three for ice hockey, along with Canada and the United States. Including the time Russia was a part of the Soviet Union, the country has won eight Olympic gold medals and 25 World Championships.

Since the National Hockey League (NHL) and the Kontinental Hockey League (KHL) are still in season, Alexander Ovenchkin and other big names in hockey were not able to participate in the friendly match. The Russian team is aiming for a gold medal at the 2018 PyeongChang Olympics, so the team was created with players aged 25 who are most likely to participate in the Games.

The Korean team is assigned to the International Ice Hockey Federation (IIHF) Division I, which means Norway, ranked 11th in the world, was the highest ranked team Korea played prior to its match with Russia. Although analysts expected Korea to get swept by the Russian team, at one point during the second game, the Korean team was in the lead.

During the friendly matches, four naturalized hockey players, who are main players for Korea, did not play due to injuries.

While the team was losing 3-0 during the first friendly match on Saturday, the Korean team scored three goals in the third period. During its second game, Korea lead 2-1 in the second period as Ahn Jin-hui and Sung Woo-je of Anyang Halla scored two consecutive goals total.

The team is assigned to the same group as Canada, ranked No. 1, the Czech Republic, ranked fifth, and Switzerland, ranked seventh, at the PyeongChang Olympics.

“We’ve had a good experience against the top ranked team in the world,” Jim Paek, head coach of the Korean men’s ice hockey team, said. “We’ll strengthen our team through more playing experience.”